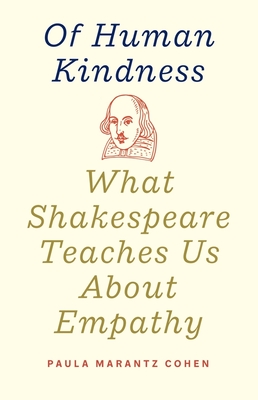 What Shakespeare Teaches Us About Empathy

While discussing Shakespeare’s plays in her university classroom, Paula Marantz Cohen discovered that they unlocked a surprising sense of compassion in both herself and her students. In this short and illuminating book, she shows how Shakespeare’s genius lay in his ability to arouse empathy, even when his characters exist in alien contexts and behave in reprehensible ways. Cohen takes her readers through a selection of Shakespeare’s most famous plays, including Hamlet,Othello,King Lear, and The Merchant of Venice, to demonstrate the ways in which Shakespeare thought deeply and clearly about how we treat “the other.” Cohen argues that only through close reading of Shakespeare can we fully appreciate his empathetic responses to race, class, gender, and age. Wise, eloquent, and thoughtful, this book is a forceful argument for literature’s power to champion what is best in us.

Praise For Of Human Kindness: What Shakespeare Teaches Us About Empathy…

"Straightforward, persuasive and eminently sympathetic....[C]onveys the pure thrill of close reading: the almost dizzying effect of peeling away layers on a great work of art to find further strata beneath—the intense pleasure of getting it."—Melissa Holbrook Pierson, Wall Street Journal

“Of Human Kindness is a dazzling book, tight in its prose, expansive in wisdom. From teaching Shakespeare, Paula Marantz Cohen learned the Bard's amazing ability to reach us in our humanity.”—David Blight, Yale University

“Cohen has captured a deep truth about Shakespeare’s work that has not been explored before—his insight into the human heart that reveals our ‘better angels.’ This is a subtle and smart work that adds substantially to our understanding of the greatest writer the world has known.”—Carmen Khan, Artistic Director, The Philadelphia Shakespeare Theater

"Thoughtful, astute, invitingly readable—and uncommonly timely. Especially now that so many younger readers are casting suspicious glances at Shakespeare, Of Human Kindness shows with mind-changing clarity why his work has never been more relevant to our common problems."—Terry Teachout, drama critic, The Wall Street Journal

"Paula Marantz Cohen approaches Shakespeare as a passionately close reader, concentrating less on the dramatic spectacle of the plays than their poetic richness and depth. The result is a marvellously perceptive and stimulating primer on the essential humanity, and humaneness, of this supreme literary artist."—John Banville, author of The Sea

"By tracing the evolution of character and complexity throughout his plays, this book ingeniously shows how Shakespeare, by enlarging his own compass of empathy, also created a more well-rounded and empathetic character for all humanity."—Devorah Baum, author of Feeling Jewish

Paula Marantz Cohen is the Dean of the Pennoni Honors College and Distinguished Professor of English at Drexel University, as well as host of the television interview show The Civil Discourse.
Loading...
or support indie stores by buying on