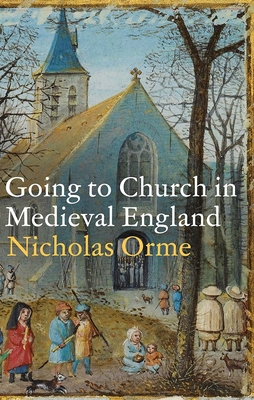 Going to Church in Medieval England

An engaging, richly illustrated account of parish churches and churchgoers in England, from the Anglo-Saxons to the mid-sixteenth century

Parish churches were at the heart of English religious and social life in the Middle Ages and the sixteenth century. In this comprehensive study, Nicholas Orme shows how they came into existence, who staffed them, and how their buildings were used. He explains who went to church, who did not attend, how people behaved there, and how they—not merely the clergy—affected how worship was staged.

The book provides an accessible account of what happened in the daily and weekly services, and how churches marked the seasons of Christmas, Lent, Easter, and summer. It describes how they celebrated the great events of life: birth, coming of age, and marriage, and gave comfort in sickness and death. A final chapter covers the English Reformation in the sixteenth century and shows how, alongside its changes, much that went on in parish churches remained as before.

Praise For Going to Church in Medieval England…

“Orme’s book, a vast intricate mosaic resting atop a mountain of research, is often funny, often moving, and always fascinating. You finish it with a real feeling for the lives of normal people (so often absent from history books) in a world of great contrasts...a world of humour, and of sadness; a world not entirely unlike our own.”—Duncan Morrison, The Daily Telegraph

'Alert throughout to change across time, the complexities of sources, and the variety of past experience, Nicholas Orme has written a wonderful book. With great clarity and insight, he captures the human and material reality of quotidian Christian worship across the middle
Ages.’—John H. Arnold, author of Belief and Unbelief in the Middle Ages


‘Drawing on both surviving churches and contemporary literature and attentive to gender, status, and geography, Orme explores what ordinary men and women saw, heard, and expe-rienced when they attended church.’—Katherine L. French, Professor of History, University of Michigan

‘What actually happened in a medieval church? What was medieval worship like? Turn to this book, and you'll find answers to all the questions you’ll ever ask.’—Professor Nigel Saul, author of Richard II

‘For many years Nicholas Orme has been enlightening readers with incisive appreciations of the religious and social institutions of medieval England. Beautifully illustrated throughout, this study brings home to readers the reality of formal Christian witness as experienced by England’s medieval parishioners.’—Dr Roger Bowers, University of Cambridge

Nicholas Orme is Emeritus Professor of History at Exeter University. He has written more than thirty books on the religious and social history of England, including Medieval Children, Medieval Schools, Medieval Pilgrimage, and The History of England’s Cathedrals.
Loading...
or support indie stores by buying on
(This book is on backorder)