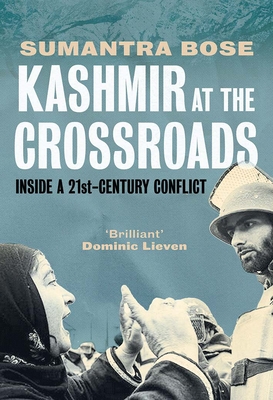 Kashmir at the Crossroads

Inside a 21st-Century Conflict

An authoritative, fresh, and vividly written account of the Kashmir conflict—from 1947 to the present

The India-Pakistan dispute over Kashmir is one of the world’s incendiary conflicts. Since 1990, at least 60,000 people have been killed—insurgents, civilians, and military and police personnel. In 2019, the conflict entered a dangerous new phase. India’s Hindu nationalist government, under Narendra Modi, repealed Indian-administered Jammu and Kashmir’s autonomous status and divided it into two territories subject to New Delhi’s direct rule. The drastic move was accompanied by mass arrests and lengthy suspension of mobile and internet services.

In this definitive account, Sumantra Bose examines the conflict in Kashmir from its origins to the present volatile juncture. He explores the global context of the current situation, including China’s growing role, as well as the human tragedy of the people caught in the bitter dispute. Drawing on three decades of field experience in Kashmir, Bose asks whether a compromise settlement is still possible given the ascendancy of Hindu nationalism in India and the complex geopolitical context.

Praise For Kashmir at the Crossroads: Inside a 21st-Century Conflict…

“Sumantra Bose is one of the world's leading experts on Kashmir. His brilliant new book explains how the advent of Modi and growing Indo-Chinese tensions have transformed the Kashmir question into potentially one of the world's most dangerous flashpoints.”—Dominic Lieven, author of Towards the Flame

“After years on the ground in Kashmir, Sumantra Bose has written a passionate and fascinating account of how the present tragic situation arose over the past 75 years. Unlike most of today’s published accounts, it focuses mainly on the Kashmiris rather than the other contestants. For those who want to understand Kashmir’s “ground truth,” this is the place to start.”—Teresita Schaffer, former U.S. diplomat

Sumantra Bose is one of the world’s foremost experts on the Kashmir conflict. He is the author of seven books including Contested Lands: Israel-Palestine, Kashmir, Bosnia, Cyprus and Sri Lanka and Secular States, Religious Politics: India, Turkey, and the Future of Secularism.
Loading...
or support indie stores by buying on