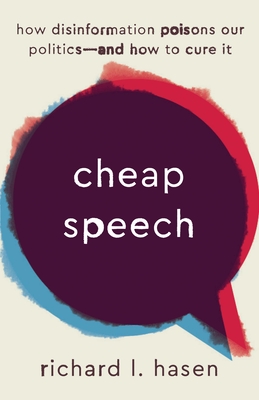 How Disinformation Poisons Our Politics—and How to Cure It

“Hasen puts forth a number of solid recommendations on how to combat disinformation.”—Richard Stengel, New York Times

“Hasen has written an extraordinary, thorough and fair examination of the impact of misinformation on democracy.”—Jeff Kosseff, Lawfare

What can be done consistent with the First Amendment to ensure that American voters can make informed election decisions and hold free elections amid a flood of virally spread disinformation and the collapse of local news reporting? How should American society counter the actions of people like former President Donald J. Trump, who used social media to convince millions of his followers to doubt the integrity of U.S. elections and helped foment a violent insurrection? What can we do to minimize disinformation campaigns aimed at suppressing voter turnout?

With piercing insight into the current debates over free speech, censorship, and Big Tech’s responsibilities, Richard L. Hasen proposes legal and social measures to restore Americans’ access to reliable information on which democracy depends. In an era when quack COVID treatments and bizarre QAnon theories have entered mainstream, this book explains how to assure both freedom of ideas and a commitment to truth.


Praise For Cheap Speech: How Disinformation Poisons Our Politics—and How to Cure It…

“Hasen puts forth a number of solid recommendations on how to combat disinformation.”—Richard Stengel, New York Times

“Hasen has written an extraordinary, thorough and fair examination of the impact of misinformation on democracy.”—Jeff Kosseff, Lawfare

“Rick always gets where the real power lies.”—Elie Mystal, on Twitter

"Cheap Speech offers a fresh, persuasive and deeply disturbing overview of the baleful and dangerous impact on the nation of widely disseminated false speech on social media.  Richard Hasen, the country’s leading expert about election law, has written this book with flair and clarity."—Floyd Abrams, author of The Soul of the First Amendment


“As Rick Hasen says of the moment we’re in, ‘the matter is urgent, and the stakes could not be higher.’ He’s right. Hasen’s book could not be timelier and more salient. If you want to understand the problems we face at the intersection of speech and elections, this is the book to read.”—Trevor Potter, Founder and President of Campaign Legal Center

"Rick Hasen not only details the threats that disinformation, misinformation and manipulation pose to democracy and civil society but offers concrete ideas for ameliorating them. Essential and compelling reading at a critical time in our history."—Norman Ornstein, co-author of It's Even Worse Than It Looks: How the American Constitutional System Collided with the New Politics of Extremism


“Professor Rick Hasen, the foremost expert on election law in the country, has written an enormously important book on how American democracy is endangered by the ability to easily disseminate false information over the internet and social media.”—Erwin Chemerinsky, author of Presumed Guilty: How the Supreme Court Empowered the Police and Subverted Civil Rights

“Rick Hasen has done with 'cheap speech' what he has achieved so well in his other writing on contemporary and urgent election law topics. Anyone interested in this subject will learn much from this book, which will help inform the national debate.”—Bob Bauer, co-author of After Trump: Reconstructing the Presidency

Richard L. Hasen is Chancellor’s Professor of Law and Political Science at the University of California, Irvine. His previous books include The Voting Wars, Plutocrats United, The Justice of Contradictions, and Election Meltdown. He lives in Studio City, CA.
Loading...
or support indie stores by buying on