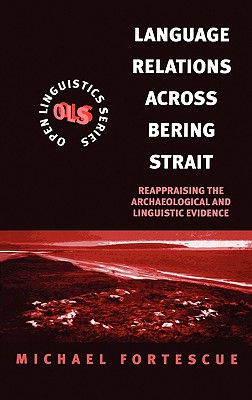 Language Relations Across the Bering Strait

In building up a scenario for the arrival on the shores of Alaska of speakers of languages related to Eskimo-Aleut with genetic roots deep within Sineria, this book touches upon a number of issues in contemporary historical linguistics and archaeology. The Arctic gateway to the New World, by acting as a bottleneck, has allowed only small groups of mobile hunter-gatherers through during specific propitious periods, and thus provides a unique testing ground for theories about population and language movements in pre-agricultural times. Owing to the historically attested prevalence of language shifts and other contact phenomena in the region, it is arguable that the spread of genes and the spread of language have been out of step since the earliest reconstructable times, contrary to certain views of their linkage. Proposals that have been put forward in the past concerning the affiliations of Eskimo-Aleut languages are followed up in the light of recent progress in reconstructing the proto-languages concerned. Those linking Eskimo-Aleut with the Uralic languages and Yukagir are particularly promising, and reconstructions for many common elements are presented. The entire region Great Beringia is scoured for typological evidence in the form of anomalies and constellations of uncommon traits diagnostic of affiliation or contact. The various threads lead back to mesolithic times in south central Siberia, when speakers of a Uralo-Siberian mesh of related languages appears to have moved along the major waterways of Siberia. Such a scenario would acount for the present distribution of these languages and the results of their meeting with remnants of earlier linguistic waves from the Old World to the New.

Michael Fortescue is Professor of General Linguistics in the Department of Scandinavian Studies and Linguistics of the University of Copenhagen, Denmark.
Loading...
or support indie stores by buying on