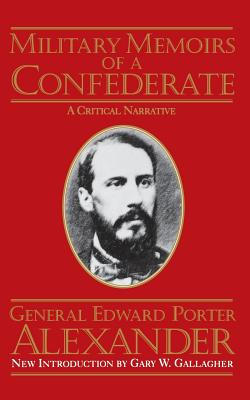 Military Memoirs Of A Confederate

General Edward Porter Alexander was the master gunner of the Confederacy, and undeniably one of the great American artillerists. He was involved in nearly all of the great battles of the East, from First Manassas through Appomattox; on the second day at Gettysburg, Alexander's battalion executed one of the greatest artillery charges of the war; Longstreet relied upon him for reconnaissance, and Stonewall Jackson wanted him made an infantry general.
Alexander wrote two books: a personal memoir intended for his children, which remained unnoticed until 1989, when it was published to enormous critical acclaim as Fighting for the Confederacy; and this book, Military Memoirs of a Confederate, which was first published in 1907 and immediately recognized as a classic. Unlike Fighting for the Confederacy, which was based largely on Alexander's own recollections, Military Memoirs relies on a vast amount of research. It is undoubtedly the most accurate and most important first-hand general history of the Civil War.

Gary W. Gallagher is the author of a biography of Stephen Dodson Ramseur and has edited a number of books on the Civil War, including Fighting for the Confederacy: The Personal Recollections of General Edward Porter Alexander.
Loading...
or support indie stores by buying on