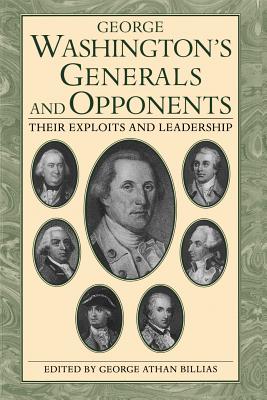 Their Exploits and Leadership

"This volume is exceedingly well-executed. All the essays are of superior quality, and several make fresh contributions to knowledge. In every instance, the emphasis is away from drum-and-bugle history."--New York Times Book Review

America's victory came as a surprise to many people. How did untrained American generals, essentially military amateurs at the outbreak of war, and their ragged, half-starved troops manage to defeat British professionals? To what extent did the quality of British military leadership affect the outcome? Was the American success due to the British commanders' incompetence and faulty strategy, or were timing and opportunity more responsible for Washington and his colleagues' achievement?

This book provides superbly balanced portraits of the British and American leadership. Renowned historians have contributed concise, remarkably informative, and authoritative essays on generals of both sides. The military gallery includes such Americans as George Washington, Nathaniel Greene, Benedict Arnold, Marquis de Lafayette, and eight others. The British are well-represented by Thomas Gage, Sir William Howe, Charles Lord Cornwallis, and seven others.
Each piece not only explores the subject's personality and exploits, but interprets his contribution to victory or defeat. In the process the scholarship never loses sight of the brave, touchy, brilliant, and flawed personalities who fought beside and against one another. Rarely, if ever, has one volume offered such stimulating commentary and insights into key commanders of the Revolutionary War.

George Athan Billias is Jacob and Frances Hiatt Professor of History (Emeritus) at Clark University and author of Elbridge Gerry: Founding Father and Republican Statesman and General John Glover and His Marblehead Mariners.
Loading...
or support indie stores by buying on