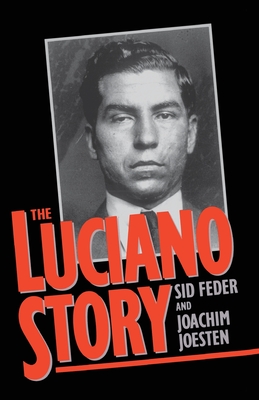 "Two veteran crime reporters reveal the operations of organized crime, narcotics, and prostitution in a careful and precise manner."--Christian Science Monitor
No gangster has ever been more powerful than Charles "Lucky" Luciano (1897-1962). By the mid-1920s, he had taken over the New York bordellos and was making more than a million dollars a year. In 1931 he engineered the murders of the two reigning New York crime bosses, Joe Masseria and Salvatore Maranzano, and quickly took over the entire New York crime racket. Now Luciano was the Boss of Bosses, the undisputed leader of the National Crime Syndicate which he had established, along with Meyer Lansky, Louis "Lepke" Buchalter, Joe Adonis, and Frank Costello, in the early 1930s. His fall came in 1936, when he was indicted on ninety counts of extortion and direction of harlotry. But in 1945 he was released in return for his cooperation with the U.S. Navy during World War II. He spent the rest of his life in Italy, where he ran the International Crime Syndicate, shipping millions of dollars worth of heroin into the U.S.
The Luciano Story is the definitive biography of this legendary gangster, based on years of research and dozens of interviews with Luciano himself and among other firsthand accounts. First published in 1954 but long out of print, this book authenticated, for the first time, the far-reaching and sinister operations of the international crime syndicate, International, and its direction by the keenest criminal mastermind in American history.

Sid Feder was an authority on organized crime in the U.S, and coauthored the classic Murder, Inc.

Joachim Joesten, an expert on drug traffic and the European underworld, interviewed Lucky Luciano, narcotics agents, and police officials in Italy to gather information for this book.
or support indie stores by buying on
Copyright © 2020 American Booksellers Association