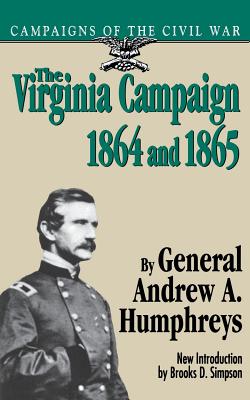 By General Andrew A. Humphreys

"Recounts the climactic year-long grapple between the Civil War's two foremost generals--Ulysses S. Grant and Robert E. Lee. A classic campaign history."--Brooks D. Simpson
Most people still view the final, bloody confrontation between Ulysses S. Grant and Robert E. Lee as a relentless grinding away of the Army of Northern Virginia in a continuous battle of attrition, attributing Grant's victory not to his generalship but to his overwhelming superiority in numbers. General Andrew A. Humphreys (1810-1883), chief of staff of the Army of the Potomac and later the fiery commander of the Second Corps, provides readers with a far more enlightened understanding in The Virginia Campaign, 1864 and 1865. Humphreys was known for his high military scholarship, conspicuous courage, and remarkable coolness in combat. Joshua Chamberlain hailed him as "the accomplished, heroic soldier, the noble and modest man." Humphreys led troops in action at Fredericksburg, Chancellorsville, and Gettysburg; by war's end he was still fighting, blocking Lee's retreating columns and helping to hem in the Confederates at Appomattox.
In The Virginia Campaign, Humphreys examines the strategy, battles, and consequences from the detached perspective of a historian intimately acquainted with his material. Especially valuable is his clear dissection of alternative plans of campaign. For readers seeking concise accounts of, and insightful analyses into, the battles of the Wilderness, Spottsylvania Court House, and Cold Harbor, the siege of Petersburg, the capture of Richmond, and the surrender of Lee's army, this volume in the landmark Campaigns of the Civil War series more than fulfills the requirements.
Introduction by Brooks D. Simpson

Andrew A. Humphreys was Brigadier-General, Chief of Engineers, and Brevet Major-General U.S.A.; Chief of Staff, Army of the Potomac, and Commander of the Second Corps, US Army.
or support indie stores by buying on
Copyright © 2020 American Booksellers Association