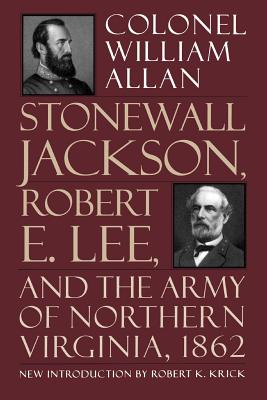 "No student of the Eastern Theater can afford to be without this unsurpassed narrative."--Civil War News
"[A] standard authority. . . . The admirable work of Colonel Allan . . . raised the level of historical writing on the Confederacy."--Douglas Southall Freeman
This volume unites two classic Civil War campaign studies by the foremost southern historian of the immediate postwar era: History of the Campaign of Gen. T. J. (Stonewall) Jackson in the Shenandoah Valley of Virginia and The Army of Northern Virginia in 1862. Together they comprise a brilliant, breathtaking chronicle of the high tide of the Confederacy in 1862: Jackson's dazzling generalship in the Valley Campaign; Lee's bold offensive during the Seven Days Battle; the stunning Confederate victory at Second Manassas; Lee's decision to carry the war to enemy territory; the capture of Harper's Ferry; the bitterly fought Battle of Sharpsburg; and the bloody, humiliating Federal defeat at Fredericksburg.
New introduction by Robert K. Krick

William Allan (1837-1889) participated in many actions and earned the respect of both Jackson and Lee, causing the former to refuse Lee's request to transfer Allan to his own staff on the grounds that Jackson could not spare the young colonel. Allan's histories draw on scrupulous research; on his firsthand observation of Jackson, Ewell, Johnston, Longstreet, and Early; and on several postwar discussions with Lee himself. With the addition of sixteen specially commissioned maps, this edition makes available two benchmarks in Confederate military literature that illuminate, provoke, and endure.
or support indie stores by buying on
Copyright © 2020 American Booksellers Association