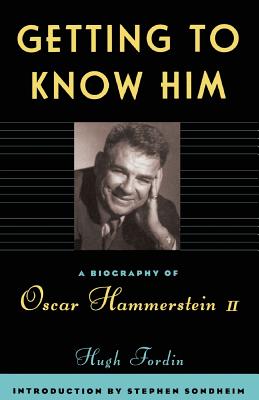 Getting To Know Him

A Biography Of Oscar Hammerstein II

Oscar Hammerstein II (1895-1960) forged a remarkable, multifaceted career as a librettist, lyricist, playwright, director, and producer. He wrote Carmen Jones, Carousel, Show Boat, and, with longtime collaborator Richard Rodgers, Oklahoma!, South Pacific, The King and I, and The Sound of Music.

Hugh Fordin enjoyed complete access to the Hammerstein archives and conducted numerous interviews with family and colleagues like Rodgers, Berlin, Robbins, and Sondheim. The result is the definitive biography of a creative giant, who changed forever the texture of American theater.

Hugh Fordin has been a producer in both theater and film. As head of casting for David Merrick, he was involved in the making of M*A*S*H, Hello Dolly!, and Play It Again, Sam. The author of The Movies' Greatest Musicals: The Freed Unit at MGM, he lives in New York City, where he is the president of DRG Records.
Loading...
or support indie stores by buying on