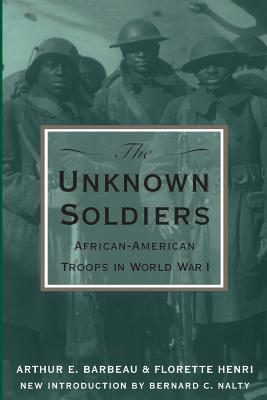 African-American Troops in World War I

During World War I 370,000 African Americans labored, fought, and died to make the world safe for a democracy that refused them equal citizenship at home. The irony was made more bitter as black troops struggled with the racist policies of the American military itself. The overwhelming majority were assigned to labor companies; those selected for combat were under-trained, poorly equipped, ad commanded by white officers who insisted on black inferiority. Still, African Americans performed admirably under fire: the 369th Infantry regiment was in continuous combat loner than any other American unit, and was the first Allied regiment to cross the Rhine in the offensive against Germany.The Unknown Soldiers, the only full-scale examination of the subject, chronicles the rigid segregation; the limited opportunities for advancement; the inadequate training, food, medical attention, housing, and clothing; the verbal harassment and physical abuse, including lynchings; the ingratitude, unemployment, and unprecedented racial violence that greeted their return. The Unknown Soldiers is an unforgettable, searing study of those wartime experiences that forced African Americans to realize that equality and justice could never be earned in Jim Crow America, but only wrested from its strangling grip.

Arthur E. Barbeau is professor of history and anthropology at West Liberty State College. Florette Henri's books include The Unknown Soldiers, Black America 1900-1920 and, for young adults, Bitter Victory: Black Soldiers in World War I.
Loading...
or
Not Currently Available for Direct Purchase