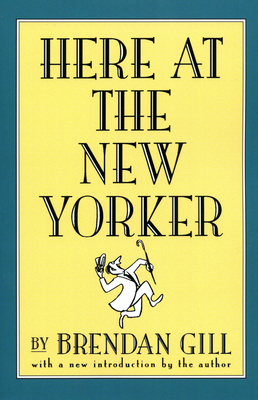 Here At The New Yorker

For over sixty years Brendan Gill has been a contented inmate of the singular institution known as the New Yorker. This affectionate account of the magazine, long known as a home for congenital unemployables, is a celebration of its wards and attendants—William Shawn, Harold Ross's gentle and courtly successor as editor; the incorrigible mischief-maker James Thurber; the two Whites, Katherine and E. B.; John O'Hara, "master of the fancied slight"; and, among a hundred others, Peter Arno, Saul Steinberg, Edmund Wilson, and Lewis Mumford. Brendan Gill has known them all, and by virtue of his virtually total recall, keen eye, and impeccable prose, his diverting portraits of these eccentrics in rage and repose are amply supplied with both dimples and warts. Here at the New Yorker—now updated with a new introduction detailing the reigns of Robert Gottlieb and Tina Brown—is a delightful tour of New York's most glorious madhouse.

Brendan Gill (1914–1997) was a staff writer for theNew Yorker for over sixty years. He was the author of over twenty books, including his memoir, Here at the New Yorker (also available from Da Capo Press/Perseus Books Group), three works of fiction, and biographies of Cole Porter, Tallulah Bankhead, and Charles Lindbergh.
Loading...
or support indie stores by buying on