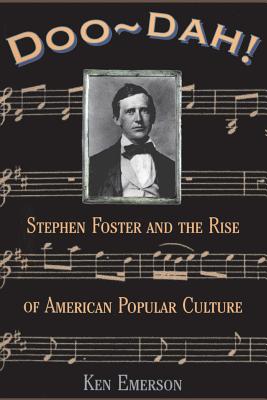 Stephen Foster And The Rise Of American Popular Culture

"A colorful, panoramic view of 19-century American society--with P. T. Barnum, Frederick Douglass, Harriet Beecher Stowe, and Foster's relative President James Buchanan all glimpsed in the background. The author's enviably broad knowledge of pop music . . . allows him to draw provocative and intelligent parallels with figures from American culture past and present."--Washington Times
Stephen Foster (1826-1864) was America's first great songwriter and the first to earn his living solely through his music. He composed some 200 songs, including such classics as "Oh! Susanna," "Jeanie with the Light Brown Hair," "Old Folks at Home (Way down upon the Swanee River)," and "Camptown Races (Doo-dah! Doo-dah!)." He virtually invented popular music as we recognize it to this day, yet he died at age thirty-seven, a forgotten and nearly penniless alcoholic on the Bowery. The author reveals Foster's contradictory life while disclosing how the dynamics of nineteenth-century industrialization, westward expansion, the Gold Rush, slavery, and the Civil War infused his music, and how that music influenced popular culture.

Ken Emerson, a former editor of The New York Times Magazine and New York Newsday, has written about popular music for thirty years. He lives in New Jersey.
Loading...
or
Not Currently Available for Direct Purchase