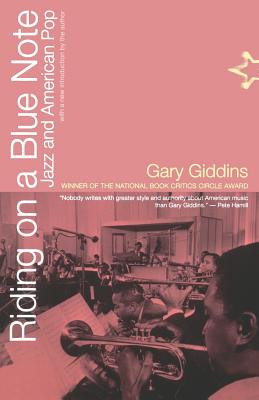 Riding On A Blue Note (Paperback)

Gary Giddins, winner of the 1998 National Book Critics Circle Award, has a following that includes not only jazz enthusiasts but also pop music fans of every stripe. Writing here in a lyrical and celebratory style all his own, Giddins dazzlingly shows us among many other things how performers originally perceived as radical (Bing Crosby, Count Basie, Elvis Presley) became conservative institutions . . . how Charlie Parker created a masterpiece from the strain of an inane ditty . . . how the Dominoes helped combine church ritual with pop music . . . and how Irving Berlin translated a chiaroscuro of Lower East Side minorities into imperishable songs.

His other books include Bing Crosby: A Pocketful of Dreams-The Early Years, 1930-1940, which won the Ralph J. Gleason Music Book Award and the ARSC Award for Excellence in Historical Sound Research; Weatherbird: Jazz at the Dawn of Its Second Century; Faces in the Crowd; Natural Selection; Warning Shadow; and biographies of Louis Armstrong and Charlie Parker. He has won six ASCAP-Deems Taylor Awards, a Guggenheim Fellowship, and a Peabody Award in Broadcasting. He lives in New York, NY.
or support indie stores by buying on
Copyright © 2020 American Booksellers Association