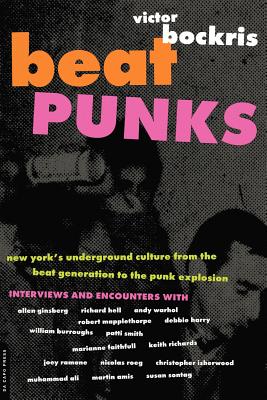 Here, accompanied by dozens of unique photographs, are the very best of Victor Bockris's infamous interviews, essays, and observations on the stars of downtown Manhattan in the 1970s and 1980s. The internationally acclaimed biographer Bockris was there as a witness, friend, collaborator, and co-conspirator. Some of the stars were founding members of Beat or Punk, others were just passing through. But all of them—rockers, rebels, artists, and intellectuals—revealed more to Bockris than they did to any other writer: Allen Ginsberg, Richard Hell, Andy Warhol, Robert Mapplethorpe, Debbie Harry, William Burroughs, Patti Smith, Marianne Faithfull, Keith Richards, Terry Southern, Martin Amis, and Susan Sontag. Bockris's conclusion—that Punk owed the Beats a big debt and that the Beats were in turn re-animated by the Punks—is argued from the perspective of someone who was in the thick of it, and who loved every minute of it.

Victor Bockris has written about the cultural heroes of the twentieth century for over thirty years. He is the author or co-author of major biographies on Andy Warhol, Patti Smith, The Velvet Underground, and many others. He lives in New York City.
Loading...
or support indie stores by buying on