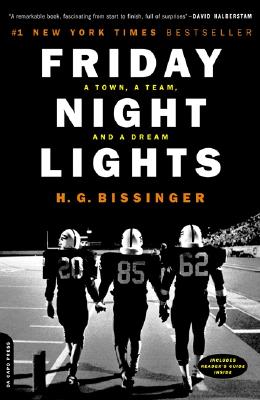 Return once again to the timeless account of the Permian Panthers of Odessa--the winningest high-school football team in Texas history. Odessa is not known to be a town big on dreams, but the Panthers help keep the hopes and dreams of this small, dusty town going. Socially and racially divided, its fragile economy follows the treacherous boom-bust path of the oil business. In bad times, the unemployment rate barrels out of control; in good times, its murder rate skyrockets. But every Friday night from September to December, when the Permian High School Panthers play football, this West Texas town becomes a place where dreams can come true. With frankness and compassion, H. G. Bissinger chronicles a season in the life of Odessa and shows how single-minded devotion to the team shapes the community and inspires--and sometimes shatters--the teenagers who wear the Panthers' uniforms.

H.G. Bissinger has won the Pulitzer Prize, the Livingston Award, the National Headliner Award, and the American Bar Association's Silver Gavel for his reporting. The author of the highly acclaimed A Prayer for the City, he has written for the television series NYPD Blue and is a contributing editor at Vanity Fair. He lives in Philadelphia.

Considering the experiences of Boobie Miles and Brian Chavez, for example, what role does football play in their lives and in the lives of the people of Odessa? Does football play a similar role in your own community? To what extent do Boobie and Brian’s ambitions and experiences prepare each of them differently for life after football?

Of the Odessa team preparing for the game against Midland Lee, Bissinger writes that “the perfection of their equipment . . . the solemn ritual that was attached to almost everything, made them seem like boys going off to fight a war for the benefit of someone else, unwitting sacrifices to a strange and powerful god.” (p 11) In what ways might they be viewed as “unwitting sacrifices”? How would you describe the “strange and powerful god” to whom they were being sacrificed?

Bissinger notes that the tradition of Odessa’s Permian Panthers “was enshrined on a wall of the field house” (p 24) and also “in the county library, where the 235-page history that had been written about Permian football was more detailed than any of the histories about the town itself.” What conclusions concerning Odessa might be drawn from the fact that its high school football program is valued more highly than the town’s history? What value does your community place on high school sports?

In what ways does race influence the attitudes and behavior of Odessa’s high-school athletes, coaches, teachers, parents, and fans? What examples of, and explanations for, continuing racism in Odessa does Bissinger provide? Do you see similar examples in your own community?

Of Boobie Miles, Bissinger writes, “He had the rawness, the abandon, the unbridled meanness.” And Bissinger makes much of the orneriness, fearlessness, and aggressiveness of many of Odessa’s football players, past and present—and of many of the town’s other citizens. What value do those attributes have for the football players and the community? What other personal qualities might be of equal or greater value?

What do Bissinger’s descriptions of classroom activity and teachers’ behavior at Permian High School reveal about the role of education in the lives of the students and adults of Odessa? To what extent are those descriptions pertinent to your own school and community? What might explain, and who is responsible for, the “devastating erosion in standards” (p 131) that many of the teachers cite? Why do you agree or disagree with Bissinger’s statement that the school’s “problems didn’t make Permian a bad school at all, just a very typically American one”? (p 132)

References to “values” appear throughout Friday Night Lights, and Bissinger repeatedly quotes statements of Odessans and others, including George Bush (Sr.), in support of “values”—”the most important buzzword,” writes Bissinger, “to be added to the lexicon of American politics in the 1988 election.” (p 187) What does the word values mean to each of those who use it, and how might those meanings have changed since the book was published?

What differences exist between the two communities of Odessa and Midland, and how do those differences affect each community’s view of itself and the other? How does social class inform those views?

Bissinger writes of team trainer Trapper O’Connell’s end-of-season perspective: “A new set of kids, a new set of faces, a new set of hopes, a new set of heroes would be paraded atop the shoulders of the town as gloriously as the Greeks honored their gods.” (p 285) “That’s my salvation,” says Trapper. “What’s their salvation?” (p 285) What do you think the kids’ salvation might be?

What specific examples does Bissinger cite of the roles of fans, coaches, teachers, parents, and school administrators in the treatment of high school football players? How accountable should school officials and parents be for the behavior of players?

How are the issues examined by Bissinger—for example, community, race, politics, economics, and class—relevant to you, your family, and your neighbors? Which issues play the greatest role in your community, and why?