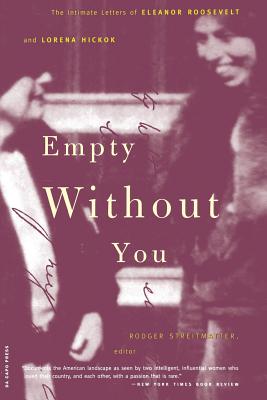 The Intimate Letters Of Eleanor Roosevelt And Lorena Hickok

"Documents the American landscape as seen by two intelligent, influential women who loved their country, and each other, with a passion that is rare." -- New York Times Book Review

In 1978, more than 3,500 letters written over a thirty-year friendship between Eleanor Roosevelt and Lorena Hickok were discovered by archivists. Although the most explicit letters had been burned (Lorena told Eleanor's daughter, "Your mother wasn't always so very discreet in her letters to me"), the find was still electrifying enough to create controversy about the nature of the women's relationship. Historian Rodger Streitmatter has transcribed and annotated more than 300 of those letters-published here for the first time-and put them within the context of the lives of these two extraordinary women, allowing us to understand the role of this remarkable friendship in Roosevelt's transformation into a crusading First Lady.

A journalist and historian, Rodger Streitmatter is a leader in exploring how communication has helped shape the history of the United States. He is a professor of journalism at American University, where he has integrated his research into his teaching and created more than a dozen new courses including popular offerings on how the news media shape history, the role of dissident media, and the media and sexuality. He is a contributor to the Washington Post, the Advocate, and other periodicals, and as a journalism scholar, he has written for Journalism and Mass Communication Quarterly, American Journalism, and Journalism History, where he is a corresponding editor. He has been a member of the Board of Directors of the Journalism Historians Association, and on the Executive Committee of the History Division of the Association for Education in Journalism and Mass Communication. He has received honors from the Virginia Press Association for his reporting, and from the American Journalism Historian Association as Outstanding Researcher.
Loading...
or support indie stores by buying on