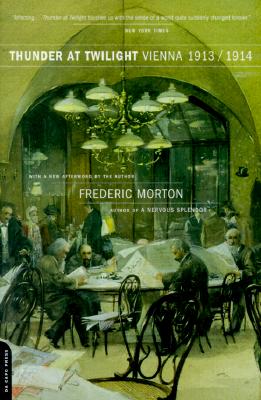 Thunder at Twilight is a landmark of historical vision, drawing on hitherto untapped sources to illuminate two crucial years in the life of the extraordinary city of Viennaand in the life of the twentieth century. It was during the carnival of 1913 that a young Stalin arrived on a mission that would launch him into the upper echelon of Russian revolutionaries, and it was here that he first collided with Trotsky. It was in Vienna that the failed artist Adolf Hitler kept daubing watercolors and spouting tirades at fellow drifters in a flophouse. Here Archduke Franz Ferdinand had a troubled audience with Emperor Franz Josephand soon the bullet that killed the archduke would set off the Great War that would kill ten million more. With luminous prose that has twice made him a finalist for the National Book Award, Frederic Morton evokes the opulent, elegant, incomparable sunset metropolisVienna on the brink of cataclysm.

Frederic Morton was born in Vienna and lives in New York City. His short stories have been chosen for Best American Short Stories, and two of his critically acclaimed nonfiction works, The Rothschilds and A Nervous Splendor, have been best sellers.
Loading...
or
Not Currently Available for Direct Purchase