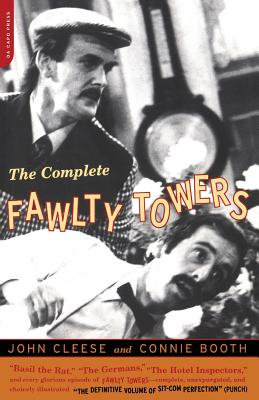 What did Basil Fawlty fail to avoid mentioning?
Why did Sybil keep snagging her cardies?
Where was Polly on the night of the great wedding anniversary disaster?
And what is the Spanish word for "donkey"?

The answer to all these questions can be found in this, the complete and unexpurgated scripts of Fawlty Towers--the most celebrated "Brit-com" of all time, and the show was voted the top UK television series ever by the British Film Institute. The snobbish, manic Basil . . . his over-coiffeured, domineering wife Sybil . . . the hopeless but ever-hopeful waiter Manuel . . . the calm and capable Polly . . . and of course the steady stream of abused guests--all live again in the pages of The Complete Fawlty Towers.

Gahan Wilson in the New York Times has called John Cleese "arguably one of the funniest people now living." And as one British periodical (Literary Review) put it, the book is "superbly well written. If you're on a bus and can't see Basil Fawlty thrashing his car with a large branch, it is some compensation to read it happening." Or as one anonymous fan put it online: "Yes, it's all here, all the comedy, the frustration, the dead body, even the rat."

John Cleese is a multi-talented actor and author who lists his recreations in Who's Who as "gluttony and sloth." At 6' 4 3/4" he is exactly the same height as Basil Fawlty.

Connie Booth, who was formerly married to John Cleese, was an oasis of sanity in Fawlty Towers as Polly.
or support indie stores by buying on
Copyright © 2020 American Booksellers Association