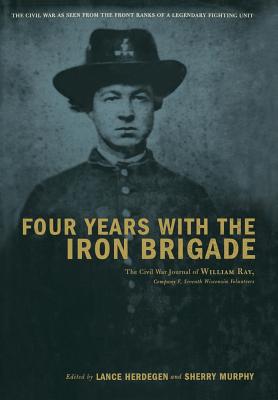 The recently discovered journal of William Ray of the Seventh Wisconsin is the most important primary source ever of soldier life in one of the war's most famous fighting organizations. No other collection of letters or diaries comes close to it.Two days before his regiment left Wisconsin in 1861, the twenty-three-year-old blacksmith began, as he described it, "to keep account" of his life in what became the "Iron Brigade of the West." Ray's journal encompasses all aspects of the enlisted man's life-the battles, the hardships, the comradeship. And Ray saw most of the war from the front rank. He was wounded at Second Bull Run, again at Gettysburg, and yet a third time in the hell of the Wilderness. He penned something in his journal almost every day-occasionally just a few lines, at other times thousands of words. Ray's candid assessments of officers and strategy, his vivid descriptions of marches and the fighting, and his evocative tales of foraging and daily army life fill a large gap in the historical record and give an unforgettable soldier's-eye view of the Civil War.

Lance J. Herdegen is the author or editor of many books, and the country's leading historian of the Iron Brigade. He teaches history at Carroll College in Waukesha, Wisconsin.