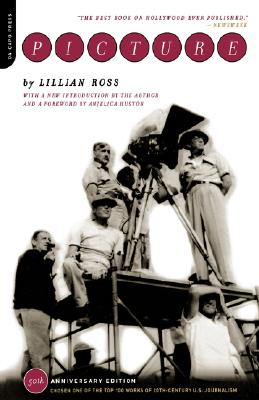 In the spring of 1950, when New Yorker staff writer Lillian Ross heard that John Huston was planning to make a film of Stephen Crane's The Red Badge of Courage, she decided she would follow the movie's progress "in order to learn whatever I might learn about the American motion-picture industry." What resulted was Picture, which Newsweek has called "the best book on Hollywood ever published." Picture received raves from the worlds of film and literature in equal measure for its unforgettable portrait of the language, the ways, and the preoccupations of Hollywood: Charlie Chaplin called Picture "brilliant and sagacious" and legendary editor William Shawn termed it "the definitive book on the Hollywood community." Little wonder, then, that when the Top 100 Works of U.S. Journalism of the Twentieth Century were chosen by the New York University Department of Journalism and a distinguished panel that included David Brinkley, Pete Hamill, Jeff Greenfield, Mary McGrory, and Morley Safer, Picture had an honored place on that list.

Lillian Ross, long a staff writer at The New Yorker, is the author of eleven books, including Portrait of Hemingway, Vertical and Horizontal, Reporting, The Player, and the forthcoming Reporting Back: Notes on Journalism. She lives in New York City.