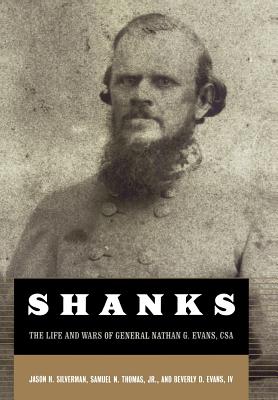 The Life And Wars Of General Nathan G. Ebans, CSA

Until now, little has been known about Nathan "Shanks" Evans, a prominent and highly controversial Confederate general who served throughout the Civil War in several theaters of operations. Thankfully, because of a recently discovered cache of his personal papers -- long rumored to exist but never before seen -- it is now possible to present his fascinating Civil War odyssey largely in his own words. Shanks covers Evans's entire amazing career, from his brave stand with a brigade at the famous stone bridge at First Manassas to his controversial months in North and South Carolina, where his erratic and harsh behavior earned the ire of much of his subordinate officer corps. Fighting in nearly every important campaign of the war, the famous brigade under his command was so well traveled it was known throughout the army as "The Tramp Brigade." Viewing the Civil War and the actions of his men through Evans's eyes is an engrossing new perspective and adds substantially to the literature of the Civil War.

Jason H. Silverman is a professor of history at Winthrop University in Rock Hill, South Carolina, and the author of many articles and books.

Samuel N. Thomas, Jr. is the curator of the Cultural and Heritage Commission of York County, South Carolina.

The late Beverly Evans IV was the great-grandnephew of General Evans.

Samuel N. Thomas, Jr. is the curator of the Cultural and Heritage Commission of York County, South Carolina. The late Beverly Evans IV was the great-grandnephew of General Evans.
Loading...
or
Not Currently Available for Direct Purchase