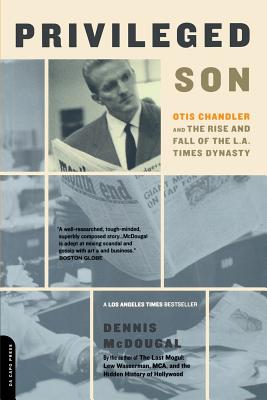 Otis Chandler And The Rise And Fall Of The L.A. Times Dynasty

Here is the riveting story of how a second-rate newspaper rose to national greatness, only to become a casualty of war-a civil war within the family that owned it. Told in a hard-edged, investigative style, it spans the American Century, from 1884, when the Chandler family gained control of the just-born daily, through April 2000, when they sold it to the Tribune Company. Above all, Privileged Son chronicles the life of Otis Chandler, the Times' chief architect after 1960, whose flamboyant exploits in and out of the publisher's suite changed the perspective of the newspaper, and Los Angeles, forever.Using scores of insider sources, Dennis McDougal, the best-selling author of The Last Mogul, will surprise readers with his findings, including accounts of political graft and early mob connections among one of L.A.'s most prominent families. The Chandlers, who helped establish the national careers of Richard Nixon, Ronald Reagan, and several other major political figures, controlled Los Angeles and the Times Mirror Corporation with a capriciousness that is seldom seen, even in the most dysfunctional media dynasties.Privileged Son is a thoroughly compelling page-burner that will keep readers engaged from its opening paragraphs. But it is also a numbing morality tale that extends far beyond Otis Chandler to highlight the greed that brought down one of America's richest family dynasties and one of its most prominent newspapers.

Dennis McDougal, an investigative reporter for the Los Angeles Times for more than a decade, has won scores of journalistic honors, including the National Headliners Award and several Associated Press awards. He lives in Long Beach, California.
Loading...
or support indie stores by buying on