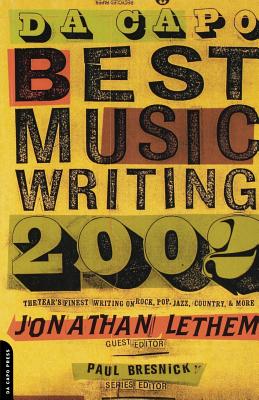 It's here: the third and latest volume in the series that you have come to rely upon for your music-reading fix. The 2002 volume will celebrate the year's best writing about music and its culture, as selected by Jonathan Lethem, best-selling novelist, music hound, and self-confessed closet rock-writer. With pieces on a dazzling array of topics from more than a hundred sources, the collection brings you remarkable essays by journalists and authors who are as serious about writing as they are about music. It's required reading for anyone who loves either art. Past contributors have included: David Rakoff Mike Doughty Lorraine Ali Greil Marcus Richard Meltzer Robert Gordon Sarah Vowell Nick Tosches Anthony DeCurtis William Gay Whitney Balliett Lester Bangs Rosanne Cash Susan Orlean Eddie Dean Selwyn Seyfu Hinds Alec Wilkinson David Hajdu

Jonathan Lethem was born in 1964 in New York City, the same week the Beatles landed at JFK. His novels include Gun, With Occasional Music; Amnesia Moon; Girl in Landscape; and Motherless Brooklyn, which won the National Book Critics Circle Award. He has also written for the New York Times Magazine, Esquire, McSweeney's, and Rolling Stone. He lives in Brooklyn.

Paul Bresnick is a literary agent and editor who has edited many award-winning music books. He lives in New York City and East Hampton.
Loading...
or support indie stores by buying on