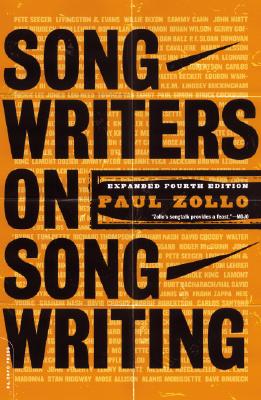 In these fifty-two interviews, the greatest songwriters of our time go straight to the source of the magic of songwriting by offering their thoughts, feelings, and opinions on their art. Representing almost every genre of popular music, from folk to Tin Pan Alley to jazz, from blues to pop rock, these are the figures who have shaped American music as we know it. Here they share their secrets and personal methods for converting inspiration into song: Robbie Robertson of the Band an Tom Petty talk about working with Bob Dylan; Dylan himself, in his only in-depth interview in more than ten years, says that the world doesn't need any new songs; R.E.M. name their favorite R.E.M. songs; Madonna describes collaborating with Prince; Sammy Cahn talks about writing standards for Sinatra; Pete Seeger recounts hitting the road with Woody Guthrie; Frank Zappa admits to loving "Louie Louie"; Todd Rundgren explains how he dreams his songs; and, in the book's most extensive interview, Paul Simon delves into his opus from "The Sound of Silence" to "Graceland." And almost all of them express delight at being able to talk about the mechanics of music itself, something that they have rarely been asked to discuss. Here expanded with new interviews with Burt Bacharach, Laura Nyro, Yoko Ono, Leonard Cohen, Graham Nash, Jackson Browne, Richard Thompson, and many others, Songwriters on Songwriting is a rare volume: one of the best books on the craft of musicmaking, an informative source for musicians and songwriters, and an invaluable historical record of the popular music of this century.

Praise For Songwriters On Songwriting: Revised And Expanded…

Brain Pickings, 5/26/14
“[An] excellent and extensive treasure trove…[The] insights on songwriting extend to the broader realm of creative work in a multitude of disciplines…A magnificent read in its hefty totality.”

Paul Zollo is a singer-songwriter, former editor of SongTalk, and has written for magazines such as Sing Out!, Acoustic Guitar, and Musician. He is currently an editor for BlueRailroad.com and a senior editor of American Songwriter. He lives in Hollywood, California.
Loading...
or support indie stores by buying on