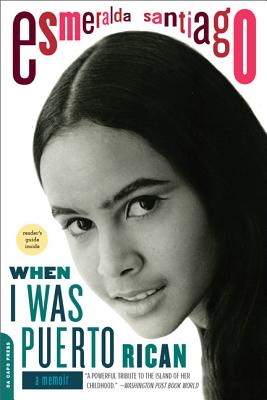 When I Was Puerto Rican

A Memoir (A Merloyd Lawrence Book)

One of "The Best Memoirs of a Generation" (Oprah's Book Club): a young woman's journey from the mango groves and barrios of Puerto Rico to Brooklyn, and eventually on to Harvard

In a childhood full of tropical beauty and domestic strife, poverty and tenderness, Esmeralda Santiago learned the proper way to eat a guava, the sound of tree frogs, the taste of morcilla, and the formula for ushering a dead baby's soul to heaven. But when her mother, Mami, a force of nature, takes off to New York with her seven, soon to be eleven children, Esmeralda, the oldest, must learn new rules, a new language, and eventually a new identity. In the first of her three acclaimed memoirs, Esmeralda brilliantly recreates her tremendous journey from the idyllic landscape and tumultuous family life of her earliest years, to translating for her mother at the welfare office, and to high honors at Harvard.

Praise For When I Was Puerto Rican: A Memoir (A Merloyd Lawrence Book)…

"Santiago brilliantly recreates the idyllic landscape and tumultuous family life of her earliest years and her tremendous journey from the barrio to Brooklyn, from translating for her mother at the welfare office to receiving high honors at Harvard. Santiago's story is one of the American dream both realized and deferred."
—Bustle.com

"[Santiago's] story has so much to teach. The relationship between Esmeralda and her mother is a perfectly imperfect demonstration of how strong women raise even stronger daughters; the resilience of the females in this story is truly inspiring."—Her Campus

"[Santiago] portrays impoverished people as people, not statistics, and we see her pride in her heritage, as well as the inevitable culture clashes. She eventually graduated with honors from Harvard University, wrote her best-selling memoir (the first in a trilogy) and became a critically acclaimed novelist-a stylist with the grace to inspire others."—Oprah's Book Club, "The Best Memoirs of a Generation"

"Will speak to anyone whose parents loved and hated each other, to anyone who recalls a child's bittersweet loss of innocence, and to anyone who simply enjoys good writing."—Miami Herald

"A powerful tribute to the island of her childhood."—Washington Post Book World

Esmeralda Santiago is the author of two memoirs, When I Was Puerto Rican and The Turkish Lover, and the novel Conquistadora. A resident of Westchester County, New York, she is married to filmmaker Frank Cantor and is the mother of two adult children, jazz guitarists Lucas and Ila.
Loading...
or support indie stores by buying on