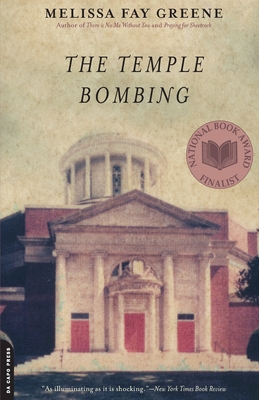 At 3:37 in the morning of Sunday, October 12, 1958, a bundle of dynamite blew out the side wall of the Temple, Atlanta's oldest and richest synagogue. The devastation to the building was vast-but even greater were the changes those 50 sticks of dynamite made to Atlanta, the South, and ultimately, all of the United States (Detroit Free Press). Finalist for the National Book Award, The Temple Bombing is the brilliant and moving examination of one town that came together in the face of hatred, a book that rescues a slice of the civil rights era whose lessons still resonate nearly fifty years after that fateful fall day.

Melissa Fay Greene is an award-winning author and journalist whose writing has appeared in the New Yorker, the New York Times, the Washington Post, the Atlantic Monthly, the Chicago Tribune, and Newsweek. She is also the author of Last Man Out: The Story of the Springhill Mine Disaster and There Is No Me Without You (Bloomsbury Press). She lives in Atlanta, Georgia.
Loading...
or support indie stores by buying on