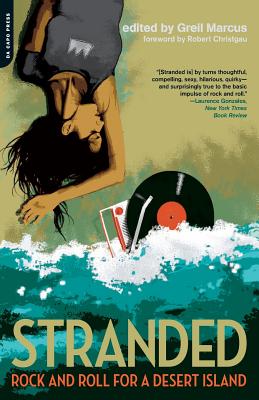 Rock and Roll for a Desert Island

In 1978, Greil Marcus asked twenty other writers on rock -- including Dave Marsh, Lester Bangs, Nick Tosches, Ellen Willis, Simon Frith, and Robert Christgau -- a question: What one rock and roll album would you take to a desert island? The resulting essays were collected in Stranded, twenty passionate declarations that, appropriately, affirmed the solitary and obsessive activity that rock listening had become. Here are salutes, elegies, thank-you notes, and love letters to records such as the Rolling Stones' Beggars Banquet , the Ramones' Rocket to Russia, Captain Beefheart's Trout Mask Replica, Something Else By the Kinks, and out-of-print classics by the Ronettes, Little Willie John, and Huey 'Piano' Smith; the whole is supplemented with Marcus's own invaluable annotated fifty-page discography, a "Treasure Island" of rock and roll. Stranded remains a classic of rock and roll literature, and perhaps the best possible answer to the question: What one rock and roll book would you take to a desert island?

Greil Marcus is the author of Bob Dylan by Greil Marcus, When that Rough God Goes Riding, The Shape of Things to Come, Mystery Train, Dead Elvis, In the Fascist Bathroom, Double Trouble, Like a Rolling Stone, and The Old Weird America; a twentieth anniversary edition of his book Lipstick Traces was published in 2009.

With Werner Sollors he is the editor of A New Literary History of America, published last year by Harvard University Press. Since 2000 he has taught at Princeton, Berkeley, Minnesota, and the New School in New York; his column "Real Life Rock Top 10" appears regularly in The Believer. He has lectured at U Cal, Berkeley, The Whitney Museum of Art, and Princeton University. He lives in Berkeley.
Loading...
or support indie stores by buying on