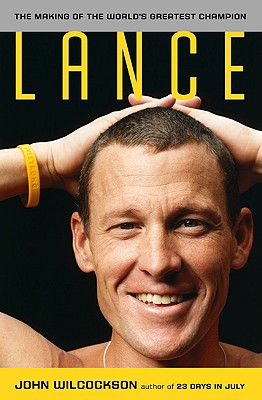 The Making of the World's Greatest Champion

No champion has astonished the world quite like Lance Armstrong. A cancer survivor who went on to win the Tour de France an unprecedented seven times, he is an inspiration to millions. Yet few know the complete story of this brash, smart, and fiercely competitive Texan who battled to the top of his sport, overcame the most rampant case of testicular cancer doctors had seen, and then conquered cycling's Holy Grail time after time. In Lance: The Making of the World's Greatest Champion, John Wilcockson draws on dozens of interviews with those who know him best to trace Armstrong's remarkable, yet controversial journey in vivid detail.

Family members--including his adoptive father speaking publicly for the first time--recall Lance's humble origins in the backstreets of Dallas, the father he barely knew, his single mom's struggle for survival, and her second marriage that brought a move to the suburbs and new opportunities. His childhood friends and early mentors remember how he moved on from Little League baseball and football to excel at swimming, running, and triathlon, while living the life of a teenager who loved fast cars and pretty girls. They also describe the circumstances that eventually led to his taking up cycling.

As Lance's fierce ambition drove him from the dusty plains of Texas to the snowy peaks of Europe, he was both admired and derided. He intimidated his rivals, earned the respect of his teammates, and astounded everyone with his extraordinary deeds. But his achievements have consistently been dogged by allegations of doping and secrecy, and questions of how triumph on such a grand scale could even be possible.

So how did Lance become the supreme champion of his sport? He didn't do it alone. His compelling story is intertwined with the stories of those who helped shape his life and career, including his mother Linda, ex-wife Kristin, and one-time fiancee Sheryl Crow, along with those of his mentors, coaches, and friends. Their voices, along with those who helped him expand his cancer foundation into a worldwide movement, are integral to his unique story. Lance also reveals details, many for the first time, of how Armstrong's legendary training, near-fatal bout with cancer, repeated doping allegations, and hostile European media all pushed him to reach the pinnacle of his sport and rightly claim the title of the world's greatest champion.

John Wilcockson has written for Outside and Men's Journal, among other publications. He is the author of 23 Days in July, one of ESPN's "Top 10 Sports Books of the Year," and lives in Boulder, Colorado.

Praise For Lance: The Making of the World's Greatest Champion…

Kirkus Reviews, 6/1/09
“[A] detailed…biography of one of the world’s most inspiring athletes…Wilcockson is at his best describing this tortuous 2,200-mile event, which tests athletes to the breaking point, and he ably captures the world of European cycling—the techniques, personalities and overwhelming passion.”

Booklist, 5/15/09
“Cycling fans will enjoy the summaries of Armstrong’s racing triumphs, and there are lots of fascinating insider anecdotes to flesh out the story line. This subject-friendly biography of one of the world’s most famous sports luminaries is sure to get lots of media hype and be in considerable demand.”

Library Journal
“This book offers stories and insights that will make it a popular choice for those who follow Armstrong and/or his sport.”

PW.com
“Wilcockson has tracked down an array of impressive sources…Armstrong has led an extraordinary life so far...”

The Independent (UK), 7/19/09
“[A] fascinating, very well put-together portrait full of insights into its subject's personality…The adult dramas – the rise to cycling prominence and his domination of the Tour, the cancer and the setting up of his cancer foundation, his marriage, fatherhood, divorce, and his relationship with Sheryl Crow – are better known, but in Wilcockson's hands they remain rich in the re-telling, and much is added to our understanding of a tumultuous life.”

The Guardian (UK), 7/19/09
“[S]ceptics might be less surprised to witness Armstrong's renaissance if they had read John Wilcockson's new biography.”

The Texas Observer, 7/10/09
“Wilcockson is able to offer the inside dope (pun intended) on the champ’s training techniques, his rise through the ranks and his triumph over family strife and cancer to emerge as one of the planet’s best-known athletes…Wilcockson certainly knows the business of bike racing, and he delivers a fine primer.”

The Daily Beast
“Lance is a compelling story of survival and, above all else, endurance.”

The New York Times, 7/23/09
“Another Armstrong book?...Is there anything left to say or explain? Yes there is and Wilcockson says it and explains it meticulously, even controversially…Confident, confrontational, motivated by anger and a fear of failure — these well-known Armstrong traits are explored at length by Wilcockson in a series of interviews with figures in the rider’s past, including his adopted father, his early mentor, relatives and boyhood friends and the doctor who first diagnosed the testicular cancer that had spread to the rider’s brain, lungs and stomach. Lance lets them all speak as Wilcockson blends their stories into a skillful portrait to detail the book’s subtitle, The Making of the World’s Greatest Champion.”

The New York Times, 7/23/09
“Another Armstrong book?...Is there anything left to say or explain? Yes there is and Wilcockson says it and explains it meticulously, even controversially…Lance lets them all speak as Wilcockson blends their stories into a skillful portrait.”

San Antonio Express News, 7/27/09
“If you're an Armstrong follower, a cyclist or a fan of sports nonfiction, Lance won't disappoint.”

Bike World News, 9/1
“[F]or fans of Armstrong who are looking for a comprehensive look at his life, this book would fit the bill.”

Buffalo News, 9/6
“[Wilcockson] offers a unique biography of Armstrong that intertwines the personal with the professional.”