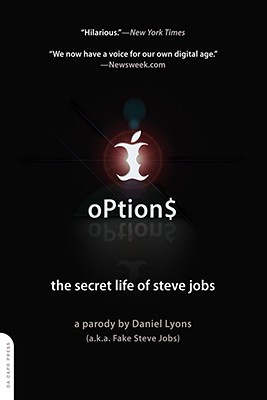 The Secret Life of Steve Jobs

Welcome to the mind, to the world of Fake Steve Jobs. Fake Steve the counterintuitive management guru: "Obviously we can't literally put our employees' lives at risk. But we have to make them feel that way." Fake Steve the political hobnobber: "I can see why they keep Nancy Pelosi under wraps. Wacky as a dime watch." Fake Steve quoting friend/musician/philosopher Bono on road etiquette: "Tink about dat next toim yer cuttin off some bloke and you don't know who it is, right? Could be Jay-sus. Or Boutros Boutros-Ghali or sumfin." And on, yes, himself: "Geniuses have feelings, too." In the tradition of Thank You for Smoking and in the spirit of The Onion, Options is a novelistic sendup and takedown of Silicon Valley, Hollywood, and Washington, D.C., as viewed by a central character who exists, to his immense self-satisfaction, at the crossroads of all three worlds: "It's like in one of those movies where a guy realizes he's got telekinetic powers and it's just too bad if he doesn't want them, he's got them. Likewise, I have this gift. It's who I am."

Praise For Options: The Secret Life of Steve Jobs…

Augusta Metro Spirit, 08/13/08
“The most beautiful incarnation of identity theft to date…A hilarious joyride through the headaches and hassles of the super-rich…Lyons has elevated parody to an unforeseen source of humor and joy, and in so doing, he offers a fascinating critique on modern society…Provides all the entertainment a reader could ask for…The perfect hilarity to open the fall season.”

Blogcritics.org, 11/13/08
“A really funny and interesting book…written in a very satirical manner…The life of [Steve] Jobs, his family and friends is so surreal, so larger then life you can’t help but be amused and interested…A thoroughly enjoyable book and a definite page turner…I highly recommend this novel to anyone with not only an interest in Steve Jobs and the Apple culture, but also anyone who enjoys interesting characters and an entertaining story.”

SRQ, 1/09
“It will make you laugh…[Lyons] has made it his business to nail the Apple guru’s every character tic…[An] imaginative novel.”

Fake Steve Jobs is an award-winning writer of fiction and nonfiction with something of an insider's knowledge of the high-tech industry. He decided to use his powers for good by starting up the wildly popular blog The Secret Diary of Steve Jobs (http://fakesteve.blogspot.com), which created the persona and voice for this novel.
Loading...
or support indie stores by buying on