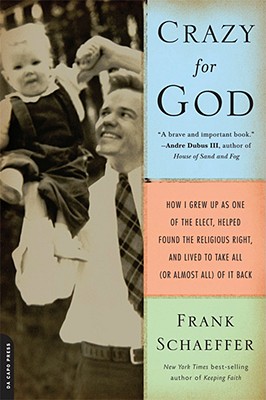 How I Grew Up as One of the Elect, Helped Found the Religious Right, and Lived to Take All (or Almost All) of It Back

By the time he was nineteen, Frank Schaeffer's parents, Francis and Edith Schaeffer, had achieved global fame as bestselling evangelical authors and speakers, and Frank had joined his father on the evangelical circuit. He would go on to speak before thousands in arenas around America, publish his own evangelical bestseller, and work with such figures as Pat Robertson, Jerry Falwell, and Dr. James Dobson. But all the while Schaeffer felt increasingly alienated, precipitating a crisis of faith that would ultimately lead to his departure—even if it meant losing everything.

With honesty, empathy, and humor, Schaeffer delivers “a brave and important book” (Andre Dubus III, author of House of Sand and Fog)—both a fascinating insider's look at the American evangelical movement and a deeply affecting personal odyssey of faith.


Praise For Crazy for God: How I Grew Up as One of the Elect, Helped Found the Religious Right, and Lived to Take All (or Almost All) of It Back…

American Author’s Association website, December 2008
“A story that needed to be told…A very personal and brutally honest memoir, that opens up and exposes the underbelly of the evangelistic movement…Gives the reader a rare and different look at some of various leaders of the fundamentalist moment...The book may open some eyes and minds about the dangers of politics and religion…A must read book for serious seekers looking for their own authentic path to enlightenment, or at least some inner peace.”

De-conversion.com, 12/2/08
“A must read for the de-converting…It is brutally honest, eye-opening, at times laugh out loud funny, and heart breaking.”

Princeton Packet, 2/13/09
“Mr. Schaeffer knows what he’s talking about. He was there, and his book lays it all out, chapter and verse.”

TCM Reviews
“[A] moving memoir…For those interested in a different perspective on Francis and Edith Schaeffer, l'Abri, and the fundamentalist right-wing evangelical movement, as well as the touching story of someone deeply involved in it all, this is a must-read.”

Augusta Metro Spirit, 4/15/09
“In a witty recollection that takes a different path from the average evangelical story, Frank Schaeffer offers an intimate portrait of a life within and without the spotlight of mass congregations…Schaeffer is more than qualified to offer candid commentary concerning the religious right in these United States…Written with an intricate collection of detail, a smooth ability to turn elements of conflict into startling moments of realization, and a wonderful search for meaning.”

Tallahassee Democrat, 7/25/09
“Part memoir, part biography, and part expose of a fundamentalist moment in U.S. religion and culture. As memoir it is at times funny, at times moving. As biography it provides an interesting, not to say intimate, perspective on Francis and Edith Schaeffer. As expose it provides revealing glimpses into the emergence of the religious right and some of its most visible leaders.”

Semi-Autonomous Collective blog, 12/27/09
“Aggravating at times, frustrating by moments, but overall terribly touching, Schaeffer isn’t hiding any flaws from the picture he paints of his own family. If there is one book to understand where the religious right comes from, it’s that one.”

Springfield News-Leader, 8/22/12
“Excellent resources for anyone interested in the strange history of the heretical anti-abortion doctrine being taught in American churches today for the purpose of garnering political support.”

Frank Schaeffer is the author of the New York Times bestseller Keeping Faith and the memoir Crazy for God. His novels, including Portofino, have been translated into nine languages. He lives in Massachusetts.
Loading...
or support indie stores by buying on