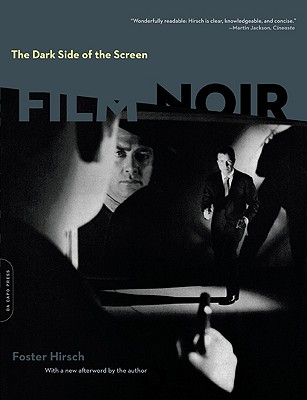 The Dark Side of the Screen

Foster Hirsch's Dark Side of the Screen is by far the most thorough and entertaining study of the themes, visual motifs, character types, actors, directors, and films in this genre ever published. From Billy Wilder, Douglas Sirk, Robert Aldrich, and Howard Hawkes to Martin Scorsese, Roman Polanski, and Paul Schrader, the noir themes of dread, paranoia, steamy sex, double-crossing women, and menacing cityscapes have held a fascination. The features that make Burt Lancaster, Joan Crawford, Robert Mitchum, and Humphrey Bogart into noir heroes and heroines are carefully detailed here, as well as those camera angles, lighting effects, and story lines that characterize Fritz Lang, Samuel Fuller, and Orson Welles as noir directors.For the current rediscovery of film noir, this comprehensive history with its list of credits to 112 outstanding films and its many illustrations will be a valuable reference and a source of inspiration for further research.

Praise For The Dark Side of the Screen: Film Noir…

Martin Jackson, Cineaste
“Wonderfully readable: Hirsch is clear, knowledgeable, and concise….[The Dark Side of the Screen] is a visual as well as literary pleasure.”

Philip French, The Observer (London)
“There has been no extended work as good as Foster Hirsch’s The Dark Side of the Screen, a well-written, imaginatively illustrated book that sees the brief, true heyday as between Wilder’s Double Indemnity (1944) and his Sunset Boulevard (1950), but looks at the prelude and the aftermath, and sets the genre in its larger social and cultural context.”

Skyscraper, Spring 2009
“An important examination of what film noir is…The 264-page treatise is not a review source; rather, Hirsch’s academic work delves deeply with a scholarly but not dry approach.”

Foster Hirsch, a professor of Film at Brooklyn College, is the author of sixteen books on film and theater, including Detours and Lost Highways: A Map of Neo-Noir; Love, Sex, Death, and the Meaning of Life: The Films of Woody Allen; and Otto Preminger: The Man Who Would Be King. He lives in New York.
or support indie stores by buying on