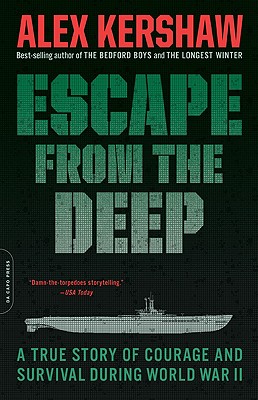 Escape from the Deep

A True Story of Courage and Survival During World War II

In the early morning hours of October 24, 1944, the legendary U.S. Navy submarine Tang was hit by one of its own faulty torpedoes. The survivors of the explosion struggled to stay alive one hundred-eighty feet beneath the surface, while the Japanese dropped deadly depth charges. As the air ran out, some of the crew made a daring ascent through the escape hatch. In the end, just nine of the original eighty-man crew survived.

But the survivors were beginning a far greater ordeal. After being picked up by the Japanese, they were sent to an interrogation camp known as the “Torture Farm.” When they were liberated in 1945, they were close to death, but they had revealed nothing to the Japanese, including the greatest secret of World War II.

With the same heart-pounding narrative drive that made The Bedford Boys and The Longest Winter national bestsellers, Alex Kershaw brings to life this incredible story of survival and endurance.


Praise For Escape from the Deep: A True Story of Courage and Survival During World War II…

American Profile Magazine, 5/24/09
“A tale of courage, survival and heroism beyond what most of us can even imagine, it's got the makings of a Hollywood blockbuster. So read it now and be ready to tell everyone, ‘Oh, the movie was good—but the book was better!”