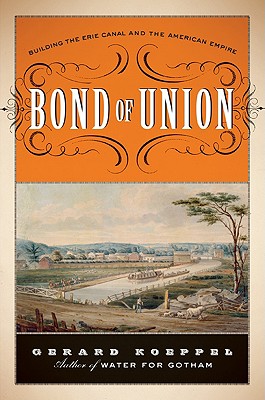 Building the Erie Canal and the American Empire

Conceived in the early 1800s and completed in 1825, the Erie Canal was the boldest and biggest American engineering project of its century, with enduring political, social, and economic effects. It was the Erie Canal that first opened up the West to American enterprise and imagination, bringing vast riches and a far-reaching vision to a rapidly expanding nation.

In this compelling narrative, author Gerard Koeppel tells the complete, sweeping story of the creation of the canal, and of the memorable characters who turned a visionary plan into a successful venture. Koeppel's extensive research includes major new findings about the construction of the canal as well as its enormous impact. Bond of Union provides a unique perspective on Manifest Destiny and the beginning of America's self-perception as an empire destined to expand to the Pacific.

Gerard Koeppel is a writer, journalist, historian, and a former editor at CBS News. The author of the highly acclaimed Water for Gotham, he lives in Manhattan.

Praise For Bond of Union: Building the Erie Canal and the American Empire…

, 3/1/09
“[The Erie Canal’s] economic impact––vaulting NYC over Philadelphia as the commercial capital of the U.S.––was ably recounted by business historian Peter Bernstein in Wedding of the Waters (2005); Koeppel adds greater emphasis in his narrative to the constellation of promoters and politicians who brought the canal into existence…[A] lively account.”

Bob Kerrey, president of the New School, former U.S. Senator
"Every page of this exceptionally well written and researched book brings to light and life some story about some previously unknown individual or incident that shaped our present world beyond what I had known. Anyone who wants to understand the story of New York and how a single public works project transformed our country should read it."

Kenneth T. Jackson, Jacques Barzun Professor of History at Columbia University and Director of the Herbert H. Lehman Center for American History, author of Crabgrass Frontier: The Suburbanization of the United States, editor in chief of the Encyclopedia of New York City, and executive director of the New York Academy of History
"Visually, the Erie Canal was little more than an unimpressive little ditch. But in the development of the United States in the middle decades of the nineteenth century, the Erie Canal was approximately as important as the Mississippi River and the Ohio River combined. Gerard Koeppel's Bond of Union is a sweeping narrative of the remarkable men who built a waterway and transformed a nation."

Pittsburgh Post-Gazette, 3/1/09
“Koeppel's superb history shows that the canal, by more tightly drawing the states together through increased commerce, helped create the conditions for a continental nation. Now, as the nation readies public works projects to aid the plunging economy, it is instructive to examine what historian Paul Johnson has called ‘probably the outstanding example of a human artifact creating wealth rapidly in the whole of history.’”

Detroit Free Press, 3/15/09
“This engrossing account of an important achievement in U.S. history shows evidence of an awesome amount of research.”

Augusta Metro Spirit, 3/18/09
“Reminds readers of the importance of independent historical research in [a] world often inundated with information and yet often lacking serious consideration…The gripping tale of how the Erie Canal came to be…Offers an extensive view of an amazing structure…With detailed precision and smooth narrative chimes, Koeppel offers a fascinating look behind the scenes of one of the more impressive structures of American history…A highly acclaimed author already (Water for Gotham), Koeppel calls forth his next masterpiece by revitalizing a historical occasion that hasn’t seemed so relevant in a long time.”

InfoDad.com, 3/26
“A meticulously researched and exhaustive history…Bond of Union may end up being the last word on a story whose last word seemed to have been written long ago…Koeppel manages to tell a story that is at times fascinating, at times genuinely gripping, and at times surprisingly modern in the way it interweaves American politics with every bit of the planning and execution of a major construction project…Students of the byways of American history will find Bond of Union a fascinating tale of a bygone era whose political echoes, if nothing else, still resonate today.”

Athens News, 3/16/09
“If American history is of interest to you, you will find it well worth the reading.”

HistoryWire.com, 4/5/09
“[Koeppel] takes his readers behind the scenes of political chicanery at several levels to show how support for the canal project often had little to do with a backer's ulterior motives.”

Tucson Citizen, 4/9/09
“This comprehensive history is lively, well researched and written by an author with a real talent for genuine story telling.”

Buffalo News, 4/12/09
“Koeppel makes it clear that the canal was the first great piece of American infrastructure, the major bond between the seaboard America and the vast continental interior.”

Schenectady Gazette, 4/12/09
“A complete, drily witty account of the design, financing, construction and operation of the Erie Canal…[Koeppel] is well-suited to revisit the story of the canal…[and has a] witty, jaunty writing voice…Among books about the Erie Canal, Koeppel’s is noteworthy for showing how astonishing it was that the project was started and succeeded.”

Smoke, 4/09
“Sheds new light on the politics, science, and rivalries that encompassed the creation of the Erie Canal.”

Irish America, July, 2009
“The Irish role in one of early America’s most important and ambitious construction projects is explored in Bond of Union."

Wesleyan, 2009
“This well-researched book tells the complete story of the creation of the Erie Canal, from its conception in 1807 to its completion in 1825, as it became the first great link between the American seaboard and the vast continental interior. Koeppel’s historical narrative involves a number of memorable individuals who were determined to see their visionary project succeed.”

“Talk of the Town,” WTVF TV (CBS, Nashville), 5/5/09
“Building America’s infrastructure is important to President Obama’s stimulus plan and this history of the Erie Canal demonstrates the widespread political, social, and economic benefits of that kind of policy from the early 1800’s through today.”

American History, August 2009
“A detailed, well-crafted look at how one big-idea infrastructure project changed a nation.”

Internet Review of Books, 5/22/09
“A detailed account of the construction of New York’s Erie Canal...The author skillfully paints a picture of the rough-hewn artificial river system of canals and locks…A fantastic tale that happens to be true, recounted by an author who knows how to bring that era back to life. Political history buffs will love every minute detail.”

Bookviews.com, June 2009
“Filled with interesting, passionate and determined characters…[and] all manner of drama.”

Niagara Gazette, 5/13/09
“A fascinating account of an engineering marvel that captured national attention in the early 1800’s.”

Reference and Research Book News, August 2009
“Koeppel strips away the myth established by repetition to give a clear-eyed and perceptive account of the creation of the Erie Canal and the strong-willed and determined characters who made it happen.”

Sacramento Book Review, 7/24/09
“A very well-researched account of a very impressive accomplishment…Koeppel shows how people with vision and initiative can overcome obstacles and achieve a goal, even over the opposition of others who are deficient in vision or initiative.”

Magill Book Review, October 2009
“A lively account of one of the most famous transportation projects in history and its impact upon America…Excellent…Explains why this waterway was necessary and how it was constructed…Fascinating…An enthralling tale of economic chaos, political intrigue, and monumental achievement. Bond of Union is history well worth reading.”

Bloomsbury Review, October 2009
“Monumental public works inspire—and typically deserve—grand exposure in books. The Erie Canal is no exception, even 184 years after its completion. This book is hardly the first to examine that feat, but it is one of the best…Bond of Union provides some useful new information…but shines mostly as an engaging narrative, stitching together the backstory and detailing the painful, step-by-step progress—and sometimes, lack thereof—as the grand ditch inched its way across the landscape.”

Rome Sentinel, 1/6/10
“You’ll learn a lot about the Erie Canal…Or maybe unlearn some.”

Lima News, 12/27/10
“[A] compelling, sweeping narrative…Memorable characters…Koeppel unearths major new findings about the construction of the canal along with the surprising twists and turns of the bold venture.”

Choice, February 2010
“Departing from the standard sole praise for DeWitt Clinton, Koeppel adds many other names to the historical record…The book is well-researched and a good read about the various leaders of the effort, the various difficulties encountered while building the canal, and the backroom politics that swirled all around the project…Recommended.”

HistoryinReview.org, 3/2/10
“Engaging…This popular history of the Erie Canal is wonderfully written in a flowing narrative style, and Koeppel's research on the topic was obviously extensive as was his passion for the subject…In addition to learning a great deal about the Erie Canal, I also came away from this book with a unique understanding of the impact that a major infrastructure project can have on a country, an understanding that is particularly relevant at this time when the country is in the grip of a recession and a push is on to jump-start job creation, and the economy. As such, this book should be read by all politicians, economists, and business people looking for ways to spur economic growth…Koeppel has done his readers a great service by reminding them that there is much to learn from the past. As well he has crafted a fine story which will enthrall anyone interested in reading about a pivotal moment in American history.”

Schuler Books & Café “A fascinating look at the economics and politics behind the building of the Erie Canal. Koeppel’s enjoyable narrative gives us an understanding of the enduring impact infrastructure projects have had on our country, both in history and today.”