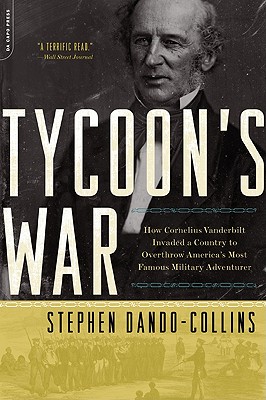 Written by a master storyteller, Tycoon's War is the remarkable account of an epic imperialist duel—a violent battle of the capitalist versus the idealist, money versus ambition, and a monumental clash of egos that resulted in the deaths of thousands of Americans. This incredible true story—impeccably researched and never before told in full—is packed with greed, intrigue, and some of the most hair-raising battle scenes ever written.

History in Review, 5/3/10
“A well-written history, with much interesting information, and it reads like a drama.” The Lone Star, November 2010
“Tells, for the first time, the complete story of this epic clash of wills…Reveals the incredible truth behind Vanderbilt’s legendary financial empire, showing just how far he was willing to go to keep it. This very interesting book will amaze you.”

Stephen Dando-Collins is an Australian-born historian, editor, and author. He has written several highly acclaimed nonfiction books, including Caesar's Legion and Tycoon's War. He lives in Tasmania.
Loading...
or support indie stores by buying on