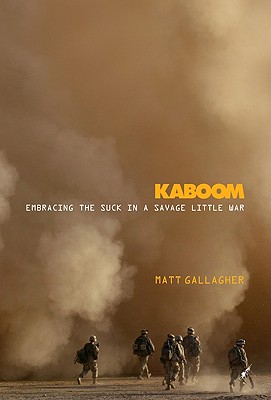 Embracing the Suck in a Savage Little War

When Lieutenant Matt Gallagher began his blog with the aim of keeping his family and friends apprised of his experiences, he didn't anticipate that it would resonate far beyond his intended audience. His subjects ranged from mission details to immortality, grim stories about Bon Jovi cassettes mistaken for IEDs, and the daily experiences of the Gravediggers-the code name for members of Gallagher's platoon. When the blog was shut down in June 2008 by the U.S. Army, there were more than twentyfive congressional inquiries regarding the matter as well as reports through the military grapevine that many high-ranking officials and officers at the Pentagon were disappointed that the blog had been ordered closed.Based on Gallagher's extraordinarily popular blog, Kaboom is "at turns hilarious, maddening, and terrifying," providing "raw and insightful snapshots of a conflict many Americans have lost interest in" (Washington Post). Like Anthony Swofford's Jarhead, Gallagher's Kaboom resonates with stoic detachment and timeless insight into a war that we are still trying to understand.

Praise For Kaboom: Embracing the Suck in a Savage Little War…

Wall Street Journal, 3/23/10
“Understanding that comedy best captures the irony of the human condition, Mr. Gallagher pokes fun at himself, his soldiers and those above him…Above all, Kaboom is about the day-to-day travails of a typical platoon set smack among thousands of disillusioned and war-weary Iraqis…Without a trace of sentimentality, Mr. Gallagher draws the reader into the everyday complexities of leading 44 soldiers from every strata of American society…One of the attractions of Kaboom is its first-hand reporting, unfiltered by a journalist’s interpretative ‘framing.’ Whenever a tense situation arises, whenever bullets start flying, Mr. Gallagher and his soldiers rush to the scene and instinctively take charge through pure force—and we’re right at their side. Mr. Gallagher brings the reader down to the stinking streets, through the sewer water and into meetings with cunning sheiks and sycophants…Mr. Gallagher is too modest, and too ironic, to tout his own accomplishments, so I'll do it for him: He is a classic representative of the U.S. military, a force that imposed its will, both physical and moral, to shatter al Qaeda in Iraq and quash the Shiite-Sunni civil war and that is now withdrawing with honor, leaving Iraq a much better place than under Saddam Hussein. Mr. Gallagher’s platoon served in chaos and brought order. His book tells us what a grind it was. Victory over the insurgency wasn’t foreordained; it took the work of gritty soldiers and leaders.”

InternetReviewofBooks.com, April 2010
“[Gallagher] proves himself a gifted writer in this boots-on-the-ground report, with some of his prose echoing the scattershot riffs of Dylan without the guitar…[His] analysis of his situation, his troopers, the rear echelon, the high command, the profiteers, and the Iraqis (friend and foe) is insightful and candid...Gallagher simply gives a platoon leader’s perspective of an ugly war that has cost our nation so much in so many ways. Perhaps it is best to think of the young lieutenant’s memoir as one more paving stone for the road toward a fair historical assessment that our grandchildren may appreciate.”

Galveston Daily News, 4/18/10
“While the opening of the book borrows heavily from the blog, it doesn’t simply regurgitate his blog postings. Gallagher adds material that puts his experiences in context and rewrote much of the rest. Unchanged is what made the blog so delightful—the irreverence of his words and the immediacy of what he experienced...Kaboom offers an intimate and poignant look at the rough men willing to do violence so good people can sleep peacefully in their beds—during a period that tested those men to their limits. It is well worth reading.”

Reno Gazette-Journal, 5/2/10
“A sharp, episodic survey of [Gallagher’s] 15-month deployment in Iraq in a frightening war where few things are as they seem…Kaboom is a modern war story. It's a 21st-century memoir reflecting the age of blogs and instant messaging in a war where national and religious customs are complicated and where the line between combatants and noncombatants is faint…The writing style, quick and incidental, might be an example of the future of prose, with younger people turning out books under the influence of blogs, Twitter and text messaging…Heavy yet compelling reading.”

ForeWord, May/June 2010
“This gritty, in-your-face account…holds its own with the best memoirs of Vietnam and World War II veterans… Gallagher describes colorfully the challenges of keeping order in a tribal society run by Sunni and Shia sheiks who hated Americans but loved American dollars…Sixteen pages of black and white photographs illustrate an already vivid book…Gallagher provides compelling accounts of the sacrifices made by the military, while questioning the purpose of war…Will greatly appeal to readers of military history and battlefield accounts.”

Publishers Weekly, 5/17/10
“[A] hauntingly direct war memoir…Provides an episodic, day-by-day account of life during wartime…Gallagher employs a close eye and enormous compassion when recounting tragedies…Vivid, atmospheric descriptions…He provides much canny, moving commentary on the power of war to transform soldiers and civilians.”

Military Times, 5/24/10
“Kaboom is funny and profound, urbane and vulgar, witty and worthwhile…Photos with informative captions, and an index [are] the only pages in Kaboom without a sense of humor…As jaw-dropping, laugh-inducing and eye-opening as any life-threatening rollercoaster ride in a war zone.”

Sacramento Book Review, 5/26/10
“A candid look at counterinsurgency warfare…Gallagher’s descriptions of daily interactions between his soldiers, civilians, sheiks, Iraqi army, and Iraqi police will keep most readers turning the pages. He conveys the terrible stress soldiers face in dangerous situations, while also communicating the marathon tedium of their daily lives…An excellent book for anyone interested in the observations, expectations, humor, and work ethic of the next generation of American leaders.”

The New Republic, 6/11/10
“A vivid and introspective chronicle of Gallagher’s fifteen months in Iraq…Its aim is simple: to explain what it is like to wage an unconventional war…Unlike a journalist, whose Heisenberg-like presence inevitably distorts, Gallagher is able to candidly depict the lighter moments of war…And Gallagher gives the book’s characters…much more than the name-rank-hometown exposition that too often flattens soldiers in print…Evocative prose, convincing dialogue, and, especially, telling vignettes of life as an American soldier in Iraq.”

Tucson Citizen, 6/14/10
"[Gallagher] freely shares what it was like to face the ever-presence threat of snipers and roadside bombs. He debates the effectiveness of the overall military strategy of the latest surge and struggles to understand the big picture in a memoir that is honest, candid, and insightful.”

JulesCrittenden.com, 6/14/10
“Beautifully written, literary in its approach, and looks to be a good companion to [Rage Company’s] more Spartan, unadorned take on the business end of surge operations and counterinsurgency.”
Kick Ass Book Reviews, 6/24/10“Gallagher is a phenomenal writer…He is so real in his writing. He does not hold back, which is why his story is so appealing. We want the truth, and Gallagher gives us nothing but…This war story is as real as you can get. Welcome to the history books Lieutenant.” Nancy Pearl (via Twitter), 6/27/10“Matt Gallagher's Kaboom—ironic, visceral, based on his well known blog about his experiences as an army lieutenant in Iraq.” “Talk of the Town” (WTVF), 6/1/10“If you want the inside soldier’s view of the most recent Iraq War, read this first person account of Gallagher’s 15 month deployment.” Winston-Salem Journal, 7/25/10“Gallagher is the voice of this war.” Collected Miscellany, 6/15/10“Gallagher does an excellent job of portraying the daily grind of counterinsurgency warfare…[His] writing style is free and easy to read. He does not write with a lot of military jargon…A must-read for anyone interested in reading a grunt officer’s perspective on the counterinsurgency war in Iraq.” Midwest Book Review, June 2010“A soldier's account of the realities of war…No military library should be without this.” Proceedings, August 2010“Matt Gallagher’s memoir is the finest I have yet read from the wars in Iraq and Afghanistan…The genius of both the blog and the memoir is Gallagher’s ability and willingness to accurately capture not just the fear and boredom of small-unit combat but also its hilarity…Laugh-out-loud dialogue…Gallagher’s parting act of service is this book, which is as noteworthy for its adventurous and stylized prose as for the story it tells…As engaging a combat memoir as any I have ever read.”   Boston Globe, 8/10/10“Provides a firsthand glimpse at the fog of modern war.” New York Journal of Books, 8/20/10 “A first-person account of life where the IED hits the road. Gallagher’s first command—a scout platoon—is a classic picture of soldiers drawn straight from the American underclass…They are flawlessly presented as the Joes of the Iraq and Afghan wars…Gallagher’s men are rich in irony and political incorrectness.”

Winston-Salem Journal“Gallagher is the voice of this war.” Officer, 10/10
“Readable, often humorous…Convey[s] a sense of what the tip of the spear Soldier and his company grade leaders experienced on an Iraq deployment…For anyone wishing to get a genuine feel for recent deployment experiences of today’s Army company grade officer, this book will go a long way in delivering a realistic and candid view…Get a copy and put it on your reading list.” Reno Gazette-Journal, 10/10/10
“[A] gritty memoir about modern warfare in the Mideast.” The Old Gold and Black (Wake Forest University), 10/18/10“Kaboom has received generally positive reviews from critics, and has been noted for its unique perspective and realistic approach to the experience of a soldier.” Military Periscope, 12/3/10“First-hand observations, often graphic and sometimes droll, of war on the ground without the filtering of rear-echelon public-relations personnel.” The Ottowa Citizen (Canada),12/23/10
“An excellent and honest account of the front-lines in Iraq. Gallagher’s snippets of war alternate between the hilarious and the tragic…[A] riveting glimpse of the Iraq war.” Financial Times, 1/7/11
“Surely the Jarhead of the second Gulf war.”Siobhan Fallon, author of You Know When the Men Are Gone, 1/19/11 “Whenever I need to get my mind rooted on American soldiers in Iraq and Afghanistan, I open it to any page and find myself vividly, excruciatingly, there.”

Matt Gallagher joined the U.S. Army in 2005 and received a commission in the armored cavalry. Following a fifteen-month deployment in Iraq, Gallagher left the army in 2009. Originally from Reno, Nevada, he now lives in New York City.
Loading...
or
Not Currently Available for Direct Purchase