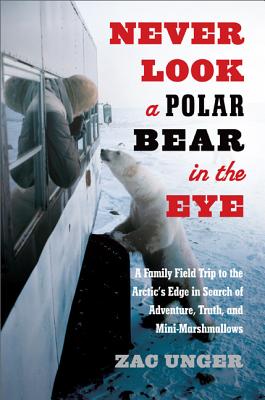 Never Look a Polar Bear in the Eye (Hardcover)

A Family Field Trip to the Arctic's Edge in Search of Adventure, Truth, and Mini-Marshmallows

“I like to go out for walks, but it’s a little awkward to push the baby stroller and carry a shotgun at the same time.”—housewife from Churchill, Manitoba

Yes, welcome to Churchill, Manitoba. Year-round human population: 943. Yet despite the isolation and the searing cold here at the arctic’s edge, visitors from around the globe flock to the town every fall, driven by a single purpose: to see polar bears in the wild.

Churchill is “The Polar Bear Capital of the World,” and for one unforgettable “bear season,” Zac Unger, his wife, and his three children moved from Oakland, California, to make it their temporary home. But they soon discovered that it’s really the polar bears who are at home in Churchill, roaming past the coffee shop on the main drag, peering into garbage cans, languorously scratching their backs against fence posts and front doorways. Where kids in other towns receive admonitions about talking to strangers, Churchill schoolchildren get “Let’s All Be Bear Aware” booklets to bring home. (Lesson number 8: Never explore bad-smelling areas.)

Zac Unger takes readers on a spirited and often wildly funny journey to a place as unique as it is remote, a place where natives, tourists, scientists, conservationists, and the most ferocious predators on the planet converge. In the process he becomes embroiled in the controversy surrounding “polar bear science”—and finds out that some of what we’ve been led to believe about the bears’ imminent extinction may not be quite the case. But mostly what he learns is about human behavior in extreme situations . . . and also why you should never even think of looking a polar bear in the eye.

Zac Unger is a writer as well as a firefighter and paramedic with the Oakland Fire Department. He is the author of Working Fire: The Making of a Fireman and has written for Slate, The Economist, Men's Journal, and other publications.

Praise For Never Look a Polar Bear in the Eye: A Family Field Trip to the Arctic's Edge in Search of Adventure, Truth, and Mini-Marshmallows…

“Part travelogue, part history lesson and part memoir, Never Look a Polar Bear in the Eye bear-ly scratches the surface of ecopolitics, too, although author Unger surely tries to look at the subject from all sides. Unger is serious in the research he presents, but that’s about as far as the solemnity goes: This book will make you laugh, it will entertain you, and it will make your heart pound just a little.  It’s also a good argument-starter, so if you’re looking for discourse on global warming, you’ll find it here. Read Never Look a Polar Bear in the Eye, because even in the snow, nothing is ever black and white.”
Winnipeg Free Press, 2/2/13
“[An] often hilarious but deeply informed page-turner.”

San Francisco Chronicle, 2/10/13
“An engaging book that’s equal parts adventure story, family memoir and environmental expose.”
Lawrence Eagle Tribune, 2/10/13
“This book will make you laugh, it will entertain you, and it will make your heart pound just a little.  It’s also a good argument-starter.  So if you’re looking for discourse on global warming you’ll find it here.”
San Francisco Book Review, 2/12/13
“[Zac Unger is] quick with a witty twist of a phrase.”

Dan Rubenstein, Canadian Geographic
“Zac Unger's deep dive into the health of polar bear populations around the world cuts through the sound-bite science typically reported by the mainstream media to explore the truth about the status of this species. It's also a very engaging and entertaining book to read—no small feat when tackling such complex subject matter.”

Parents, February 2013
“[A] hilarious and informative memoir… Cozy up to a fire and check out this funny, insightful wintry read. Fans of Wild, Into the Wild and other outdoorsy tomes will love Never Look a Polar Bear in the Eye.”
Shelf Awareness, 2/1/13
“Well-researched, highly detailed… Unger’s prose is gritty, sometimes snarky, but well-intentioned… Since few of us will ever see a polar bear in the wild, Unger gives us a close a look as we’re likely to get.”
San Jose Mercury News, 1/31/13
“In this amusing and informative account of their two years in a tiny town, the author interacts with tourists and locals, scientists and conservationists—and, of course, the bears themselves.”