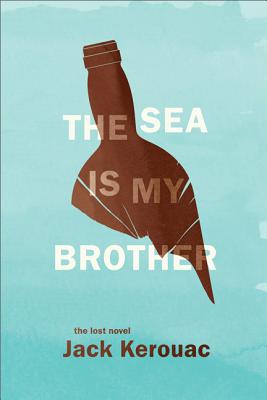 “While it may not be the Rosetta Stone of the beat movement, the publication of this flawed manuscript will be an event for [Kerouac’s] admirers.”

“Read this first effort to watch Kerouac learning the ropes.”
Entertainment Weekly, 3/2/12“You'll see hints of the bebop prose that would later pour out of Kerouac's typewriter so effortlessly.” Cleveland Plain Dealer, 3/11/12“Rarely does talking seem as much like action as it does in The Sea Is My Brother. The characters' words fire the imagination. If they don't move you, to quote Louis Jordan, ‘Jack, you dead’…There is a song inside The Sea Is My Brother, a song for anyone who has ever looked over the horizon and thought, ‘I'm gonna get out of here someday.’” Tampa Bay Times, 3/11/12

“For a glimpse of Kerouac crossing the boundary from boy to man, fans can now turn to his first novel.” Wall Street Journal, 3/20/12“[The Sea Is My Brother] offers plenty of disarming insights into who Kerouac was as a person and writer before he slipped behind the mask of Beat Generation Zen-master...The book is enjoyable” Litreactor.com, 3/20/12“The Sea is My Brother is a fascinating read, both in its own right and as part of Kerouac’s canon.” New York Post, 3/18/12“There are plenty of hints of the Kerouac to come.” Blurt-Online, 3/12/12 “[The Sea is My Brother] is perhaps the best of the posthumous releases....Could be considered the skeleton that would become gems."

“Fans of the On the Road author will be fascinated by the glimpse into Kerouac’s early writing mind.”

January Magazine, 3/22/12“For his admirers and students of his style, the book is a worthwhile read.” National Post (Canada), 3/25/12
“A foreshadowing of Kerouac at his best, a kind of sweet, unassuming persona that made his writing very engaging.” Chicago Reader, 4/13 “I loved Kerouac’s first novel, The Sea Is My Brother…[It] left me with that feeling that life is full of poems, pain, colorful characters, and small moments that matter.”
Milwaukee Shepherd Express, 4/12/12“The Sea is My Brother is chock-full of pathos, anticipation and hurt. Kerouac’s characters, including the small role players, are a perfect blend of real people living real lives. It was a brilliant, youthful performance by the author, years before he changed the pace of literature with On the Road.” Chicago New City, 4/16/12
“A captivating preview into the author—and his works—to be…A complete story, romantic, energetic, exuberant and even brash, qualities Kerouac never outgrew.” Charleston Post & Courier, 5/27/12“The fascination, and perhaps the value of this book, is that it presents itself as a clear precursor to the books that followed. Given Kerouac’s subsequent impact, it is an important artifact in the popular literature of the time.” Key West News, 6/10/12 “There is none of the jazzy, hepcat language of his mature novels here, more the mannered, measured words of the immature. Yet this first novel already has the uncanny effect that the reader dwells inside what the writer is singing.”The New York Times Book Review, 7/1/12“This ’lost novel’…signals what was to come…Kerouac scholars will be fascinated by this early work”

Jack Kerouac was born in 1922 in Lowell, Massachusetts. The best-known of his many works, On the Road, published in 1957, was an international bestseller. He died in St. Petersburg, Florida, at the age of forty-seven.
Loading...
or
Not Currently Available for Direct Purchase