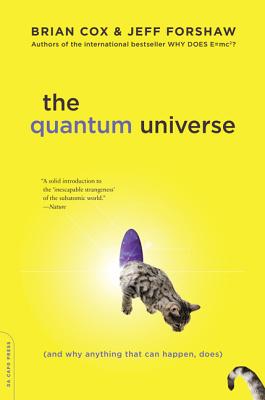 (And Why Anything That Can Happen, Does)

International bestselling authors Brian Cox and Jeff Forshaw's fascinating, entertaining, and clear introduction to quantum mechanics
In The Quantum Universe, Brian Cox and Jeff Forshaw approach the world of quantum mechanics in the same way they did in Why Does E=mc2? and make fundamental scientific principles accessible-and fascinating-to everyone.The subatomic realm has a reputation for weirdness, spawning any number of profound misunderstandings, journeys into Eastern mysticism, and woolly pronouncements on the interconnectedness of all things. Cox and Forshaw's contention? There is no need for quantum mechanics to be viewed this way. There is a lot of mileage in the "weirdness" of the quantum world, and it often leads to confusion and, frankly, bad science. The Quantum Universe cuts through the Wu Li and asks what observations of the natural world made it necessary, how it was constructed, and why we are confident that, for all its apparent strangeness, it is a good theory.The quantum mechanics of The Quantum Universe provide a concrete model of nature that is comparable in its essence to Newton's laws of motion, Maxwell's theory of electricity and magnetism, and Einstein's theory of relativity.

Brian Cox is a professor of particle physics at the University of Manchester. He is a popular TV and radio presenter and lives in London.

Jeff Forshaw is a professor of theoretical physics at the University of Manchester and a recipient of the Institute of Physics Maxwell Medal. He lives in Manchester, England.


Praise For The Quantum Universe: (And Why Anything That Can Happen, Does)…

“A careful and reader savvy exposition that pulls no punches...If you're interested in the real world and want a worthy introduction to the major achievement of humanity in the past hundred years, get hold of this book, read it slowly, digest it, make it part of your life and your life will change for the better.”
Technology and Society
“A very interesting book…I highly recommend it to anyone who wants to take on quantum mechanics without a strong background in math or physics, or to anyone who studied those subjects in college and wants to take the next step into the quantum world.”
InfoDad.com, 2/23/12
“Highly informative and more than intermittently entertaining…Not a book to be read quickly, lightly or easily. But it is an important book nevertheless, and Cox and Forshaw deserve credit for making a tremendously difficult subject about as accessible and understandable as it can possibly be made.”
BlogCritics.org, 2/21/12
“If you are interested in beginning to crack the code of quantum physics, it is a good place to start.”
About.com, 1/28/12

“If you make the effort, you will enjoy and benefit from this book, and you'll wow the folks at the water cooler when you drop a few quarks and bosons into the conversation.”

Publishers Weekly, 3/5/12
“Beginning with a brief scientific history that will be familiar to anyone who's completed college physics (but accessible to those who have not), Cox and Forshaw…go on to explain the origin of the periodic table, strong and weak nuclear forces, ‘Why We Don't Fall Through the Floor,' and myriad other interesting topics.”

San Francisco Book Review / Sacramento Book Review, 3/2/12
“Both Brian Cox and Jeff Forshaw share a rare skill of taking on a complex topic and making it comprehensible…The book is a masterpiece of modern scientific thought, well worth the reader's time and attention…The book is an easy read, despite its intense scientific underpinnings…The authors took the time and patience to carry out what they intended to show and did it with insight, style, and intelligence.”

PopMatters.com, 4/4/12
“This is a propitious time for curious minds to learn more about physics, and in particular about quantum mechanics, its most puzzling and least-understood branch. The Quantum Universe…feels like a good place to start.”

“It's a pleasure to see a science title that links daily life to complex scientific topics…Creates a powerful discussion for general readers with minimal scientific background.”
Metapsychology Online Reviews, 5/27/12
“Cox and Forshaw aim to shed some light on this difficult topic, and succeed, showing the scientific principles behind the apparent oddities of quantum world…Readers will be swept away by the authors' contagious enthusiasm….The authors show in fact how quantum theory affects our everyday life…Following Cox and Forshaw throughout the book is a great pleasure: they use a simple and direct style allowing the readers to follow easily their explanations. They successfully accomplish their aim ‘to demystify quantum theory' without depriving it of its appeal.”
American Journal of Physics, June 2012
“The first several chapters of the book are as good a quick introduction to the subject as you are likely to find anywhere.”

The Economist, 11/5/11
“In Britain Brian Cox…has become the front man for physics…Cox has secured a large fan base with…his happy turns of phrase and his knack for presenting complex ideas using simple analogies. He also admirably shies away from dumbing down…The authors' love for their subject shines through the book.”

New Scientist, 11/5/11
“A comprehensive account of how quantum mechanics works and why it must be real…The book offers many rewards, and both the language and content are so carefully chosen that it feels concise.”
Nature, 11/10/11
“A solid introduction to the ‘inescapable strangeness' of the subatomic world.”
Wall Street Journal Europe, 11/11/11
“Britain's favorite physicist has put away sound-bite science to publish a rigorous introduction to quantum mechanics.”
The Economist, 12/10/11
”A book that breaks all the rules of popular science-writing, by two of Britain's best known physicists.”
Financial Times, 11/11/11

Curled Up with a Good Book, 4/18/12
“A fine attempt to make a complex and infinitely confusing subject more accessible to the average person…By the final chapter, you may find yourself as excited by the details of a dying star as the authors are. This book is an excellent introduction to the basic concepts of quantum mechanics, full of personality as well as information.”

WomanAroundTown.com, 4/12/12
“[Cox and Forshaw are] masters at making the incomprehensible reasonably accessible…[and] the abstract more tangible. There is no doubt that this is not the book you keep in the bathroom for a quick read during commercial breaks in the big game, but it's well worth the time and effort it takes to grasp the concept of what makes our world tick.”
Science News, 4/21/12
“Two physicists use simple analogies to explain the weird world of quantum theory.”
Midwest Book Review, April 2012

“Understanding the quantum world in the deep and satisfying way that we'd like to is not at all necessary to describe its workings with exquisite precision. It is this astonishingly accurate mathematical description of the consequences of a set of rules that, as strange as they may seem, actually work, that is the focus of Professors Cox and Forshaw's brief excursion…The Quantum Universe may not demystify quantum theory, but it does give the reader an idea of the size of the mountain the book is trying to climb—and a toe-hold or two to help get us started on our own ascent.”
Charleston Post and Courier, 2/19/12

”Brian Cox and Jeff Forshaw don't skimp on the accessible approach, but they also make the extra effort to discuss the complexities around quantum theory in far more detail than most other books. It's a tough balancing act, but ends up being handled very well.”
Daily Texan, 2/12/12
“Very well may be the definitive introduction to quantum mechanics. The Quantum Universe is written for the layman, who will likely enjoy it, but it would also be a superb supplement for physics students struggling through early quantum mechanics classes… Those who take the time to read the book properly will come away from it with a profound knowledge of what quantum mechanics is and how it works…This is likely to be as accessible as quantum mechanics will ever be, at least in book form.”
Wall Street Journal, 2/26/12
“An engaging whistle-stop tour that takes us from the birth of the field to present-day tests of the Standard Model…in lucid and occasionally droll prose.”
New York Journal of Books, 2/15/12

“Thanks to his television presentations of science, Brian Cox has become Britain's best-known physics professor. No one communicates the wonders of the universe on screen with more charm, enthusiasm and accessibility. Cox's latest, co-authored with Jeff Forshaw, a fellow physics professor at Manchester University, retains the charm and enthusiasm…A serious, thorough book about quantum theory for the general reader.”
Kirkus Reviews, 1/15/12
“There is no shortage of popular introductions, but curious readers will not regret choosing this meticulous account…Space cannot be empty; matter constantly appears and vanishes. If quantum laws do not forbid something from happening, it will eventually happen. These are facts; experiments confirm them. Writers often explain these in relentlessly nontechnical language that converts them into a magic show, but Cox and Forshaw will have none of this. Using ingenious pedagogical examples, they demonstrate that weird quantum phenomena make perfect sense…An ambitious explanation of the vast quantum universe aimed at readers willing to work.”
Huffington Post, 2/8/12
or
Not Currently Available for Direct Purchase
Copyright © 2020 American Booksellers Association