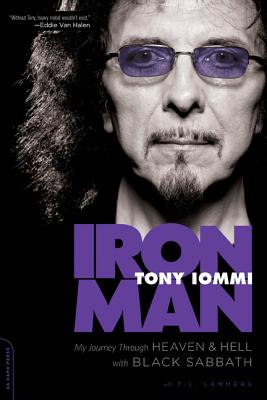 My Journey through Heaven and Hell with Black Sabbath

Iron Man chronicles the story of both pioneering guitarist Tony Iommi and legendary band Black Sabbath, dubbed "The Beatles of heavy metal" by Rolling Stone. Iron Man reveals the man behind the icon yet still captures Iommi's humor, intelligence, and warmth. He speaks honestly and unflinchingly about his rough-and-tumble childhood, the accident that almost ended his career, his failed marriages, personal tragedies, battles with addiction, band mates, famous friends, newfound daughter, and the ups and downs of his life as an artist.

Everything associated with hard rock happened to Black Sabbath first: the drugs, the debauchery, the drinking, the dungeons, the pressure, the pain, the conquests, the company men, the contracts, the combustible drummer, the critics, the comebacks, the singers, the Stonehenge set, the music, the money, the madness, the metal.

Praise For Iron Man: My Journey through Heaven and Hell with Black Sabbath…

“A four hundred page monster of a book, as heavy in places as ‘War Pigs,’ as deep and reflective in others as ‘Planet Caravan.’”
WLKY.com, 11/11/11 “In Iron Man, Iommi lays it all bare. Told in an economic, forthright style, the autobiography explores everything one would expect and then some…An enjoyable read and will make a nice holiday gift for the metalheads on your shopping list.”

Milwaukee Shepherd Express, 11/22/11
“Iron Man chronicles a life of ale, drugs and women and a trail of destruction behind every tour.”

Curled Up with a Good Book, 12/6/11“Many books have been written about Black Sabbath, but this one comes from the horse's mouth and sheds light on moments only Tonio was privy to…This certainly needs to be read by any Black Sabbath fan.” Bookgasm.com, 12/2/11
“Reveals the man behind the icon, yet still captures Iommi’s humor, intelligence and warmth.”


“In his 350+ page autobiography, Iommi leaves no doubt that he is fully deserving of the rock bad boy title but is even more worthy of the Hall of Fame nod…What makes the book stand out, though, is Iommi’s lack of pretense, his insider perspective and surprising sense of humor in telling classic tales…It’s the rare glimpse into the personal perspective of Iommi that makes Iron Man a must-read for music fans.” Blogcritics.org, 11/1/11 ”A personal look inside one of the most unique bands of the past 40 years.”
Library Journal, 11/15/11 “Iommi paints an intimate portrait of his own life from childhood to his most recent musical effort in Heaven & Hell…Readers who enjoyed Joel McIver’s Sabbath Bloody Sabbath will be drawn to Iommi’s insider perspective.”
January Magazine, 11/18/11

Kirkus Reviews, 10/1/11
“[Iommi is] most entertaining when describing the Sabbath’s incessant, hazardous prank-playing…The guitarist is not wholly unaware of the oft-ludicrous nature of his enterprise.” Publishers Weekly, 10/3/11
“An important addition to the Black Sabbath story…Iommi’s autobiography is as direct as his music.” Booklist, 11/1/11
“This memoir [is] dead certain to appeal to heavy-metal fans of all ages…With plenty of behind-the-scenes stories and fresh perspectives on some of music’s most notorious characters…this is a frank and honest look at a special part of rock history.” RollingStone.com, 10/24/11“The book recounts all the ups and downs the guitarist experienced with Ozzy Osbourne and company.”

USA Today, 10/31/11
“Iommi has a story that needs to be told…Iommi tells his story simply and chronologically, making it easy for anyone to slip into the fast-paced tale. And yes, while there are plenty of drug-fueled antics, there's no doubt the focus is on the music here, as it should be…Iommi emerges from Iron Man seeming like a true trailblazer without sounding immodest or unkind—and I've learned that's quite a feat, especially after reading, say, Motley Crue's The Dirt.”

New York Daily News, 10/28/11“A raucous autobiography…He brainstormed one of the heaviest and darkest sounds known to man. But Black Sabbath guitarist Tony Iommi makes a surprisingly sweet narrator of his own life.” Ultimateclassicrock.com, 11/1/11

The Cleveland Sound, 12/11/11
“Fans will revel in the guitarist’s lucid memory and wicked humor—but casual rock readers will likewise enjoy this tale of one unassuming English kid’s improbable rise into to the pantheon of metal godliness, thanks primarily to Iommi’s fairly objective storytelling, charming prose, and keen sense of the absurd…[Iommi is] a raconteur whose words are as endearing as they are informative.”

Elmore, January/February 2012
“Iommi dishes on a life of heavy music and even heavier times…Dignified and classy, while still spilling plenty of messy musical beans.”

Guitar World, 12/26/11
“One of the top 15 books of 2011.” Midwest Book Review, January 2012
“[Black Sabbath’s] interactions with other famous music personalities and Tony Iommi's perceptions of the music world make this a 'must' for fans of the group and any collection profiling rock music history."

“When it comes to rocker biographies, the 2011 winner is former Black Sabbath lead guitarist, Tony Iommi’s Iron Man. This is the whole package: Iommi is candid, engaging and celebrated and that’s exactly the right combo for this sort of book. Though it’s Iommi’s autobiography, this is also the story of Black Sabbath, one of the most celebrated and seminal rock outfits of all time. And on this journey we take with him we discover that our wildest imaginings about sixties and seventies rock n’ roller behavior were only scratching the service…Iommi is a likable correspondent and you don’t mind spending time in his presence for the duration of the book. If you only buy one rock biography this season, for so many reasons, it should be this one.”
Gibson.com, 11/11/11“[A] must-read…It contains some near-unbelievable stories: drugs, the Mafia, knife fights, Iommi setting fire to Black Sabbath drummer Bill Ward, killing Virgin mogul Richard Branson’s prize carp fish with Sabbath pyrotechnics, that Spinal Tap-inspiring Stonehenge stage set, even auditioning Michael Bolton as Black Sabbath singer (true!)…and, of course, all the guaranteed craziness you’d expect from a band involving Ozzy Osbourne.”
TheNervousBreakdown.com, 11/12/11

"Iron Man is likely to be the definitive insider's account of Black Sabbath, coming as it does from the man who lived and breathed the band for decades."—PopMatters.com

"A fascinating read...Always the quiet one, the man responsible for shoveling coal into the Sabbath furnace while frontman Ozzy Osbourne played the lovably demented buffoon out front, Iommi is a (perhaps surprisingly, given Sabbath's reputation) thoughtful and reflective man whose take on the history of Sabbath is surely the definitive one."—Buffalo News

"[Iommi] speaks honestly and unflinchingly about his rough-and-tumble childhood, the accident that almost ended his career, his failed marriages, personal tragedies, battles with addiction, band mates, famous friends, newfound daughter, and the ups and downs of his life as an artist."—AOL Noisecreep

"The book takes you through Iommi's entire personal life and groundbreaking musical career...A fantastic read full of small but nicely surprising personal revelations...Any fan of Black Sabbath is going to enjoy the heck out of this book."—UltimateClassicRock.com

"A must-read for fans of the heavy metal genre, this memoir is also an inspiring story of a musical group and its leader."—Hudson Valley News

"Iommi certainly does his part in revealing an endless parade of moments that should keep one turning pages at a furious pace."—Internet Review of Books

Tony Iommi is a cofounding member and lead guitarist of Black Sabbath and is among the most influential guitarists of all time. Born in 1948, he lives in Birmingham, England.
Loading...
or support indie stores by buying on