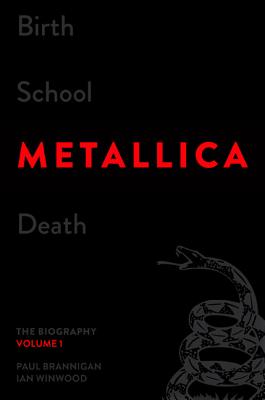 There has never been a hard rock band like Metallica. The California quartet has sold more than 100 million albums worldwide, won nine Grammy Awards, and had five consecutive albums hit number one on the Billboard charts. But Metallica's story, epic in scope, is a tale about much more than sales figures and critical acclaim, and their journey from scuzzy Los Angeles garages to the world's most storied stadiums has been dramatic and painful, their gigantic successes often shot through with tension, tragedy, loss, and controversy.
Birth School Metallica Death is the definitive story of the most significant rock band since Led Zeppelin. Volume 1 covers the band's formation up to their breakthrough eponymous fifth album, aka The Black Album. The intense and sometimes fraught relationship between aloof-yet-simmering singer, chief lyricist, and rhythm guitarist James Hetfield and the outspoken and ambitious drummer Lars Ulrich is the saga's emotional core. Their earliest years saw the release of three unimpeachable classicsKill 'Em All, Ride the Lightning, and Master of Puppetsgenre-defining masterpieces that took hard rock to a new level, both artistically and commercially. During these tumultuous times, the band persevered through line-up changes when guitarist Dave Mustaine was replaced by Kirk Hammet, and their bass player, the beloved Cliff Burton, was tragically killed in a bus crash while on tour in Europe.
But it was the breakthrough of And Justice for All that rent the fabric of the mainstream, hitting the top of the charts without benefit of radio airplay or the then-crucial presence on MTV. And finally in 1991, with the release of their fifth studio album, nicknamed The Black Album, Metallica hit the next levelfive hit singles including their best-known songs Enter Sandman and Nothing Else Matters and their first album atop the Billboard charts.
In Birth School Metallica Death, veteran music journalists and Metallica confidants Paul Brannigan and Ian Winwood detail this meteoric rise to international fame in an epic saga of family, community, self-belief, the pursuit of dreams, and music that rocks. Told through first-hand interviews with the band and those closest to them, the story of Metallica's rise to the mainstream has never been so vividly documented.

Paul Brannigan and Ian Winwood are two of the UK's foremost music writers. A contributor to Rolling Stone, Classic Rock, Q, and Metal Hammer magazines, Brannigan is the author of the acclaimed This Is a Call: The Life and Times of Dave Grohl, while Winwood has written for Rolling Stone, the, Mojo, Kerrang!, NME, and the BBC. Both reside in London.
or
Not Currently Available for Direct Purchase
Copyright © 2020 American Booksellers Association