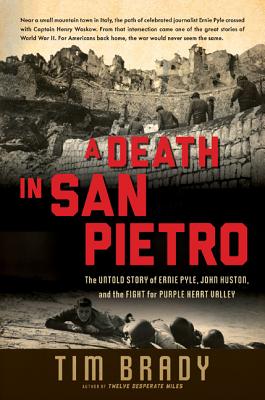 A Death in San Pietro (Hardcover)

The Untold Story of Ernie Pyle, John Huston, and the Fight for Purple Heart Valley

By the time Mark Clark's Fifth Army reached the small village of San Pietro north of Naples in the first week of December 1943, a tough but rapid sweep through Sicily came to a muddy halt. On the slopes of a distant mountain, the death of a single platoon captain, Henry Waskow, epitomized the struggle.

A Death in San Pietro chronicles the quietly heroic and beloved Captain Waskow and his company as they make their way into battle. Waskow's 36th ("Texas") Division would ultimately succeed in driving the Germans off the mountains; but not before eighty percent of Waskow's company is lost in action.

For Americans back home, two of the war's most lasting artistic expression brought horrified focus to the battlefield, already dubbed "Purple Heart Valley" by the men of the 36th. Pulitzer Prize-winner Ernie Pyle's dispatch about Waskow's death and filmmaker John Huston's award-winning documentary of the battle rivets--and shocks--the nation, bringing, as if for the first time, the awful carnage of world war into living rooms across America.

Tim Brady is an award-winning author, whose book Twelve Desperate Miles received wide acclaim. He is a regular contributor to PBS and currently writes for History Channel Magazine, Minnesota, and Minnesota Monthly.

Praise For A Death in San Pietro: The Untold Story of Ernie Pyle, John Huston, and the Fight for Purple Heart Valley…

Dallas Morning News, 11/17/2013
“Concise and distinctive as Pyle's dispatches and forceful as a John Huston film, Tim Brady's A Death in San Pietro is no less a memorial.”

“[Brady] begins with three stories…and effectively pulls them together to create a fascinating narrative…that evokes a deeper sense of the soldiers' fears, hopes, and sense of loss.”

“[A] very well written book and should be read by anyone who remembers those terrible years. The characters are compelling…it is superbly written and full of action.”

“A Death in San Pietro is a blood and mud soldier's eye view of a pointless messy slaughter that too often defines war.”