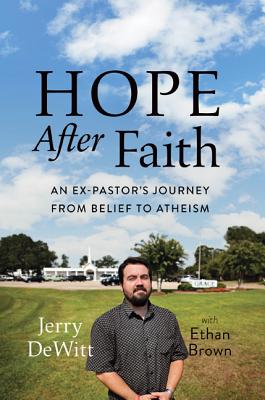 An Ex-Pastor's Journey from Belief to Atheism

Atheism's leading lights have long been intellectuals raised in the secular and academic worlds: Richard Dawkins, Sam Harris, and the late Christopher Hitchens. By contrast, Jerry DeWitt was born and bred into the church and was in fact a Pentecostal preacher before arriving at atheism through an extraordinary dialogue with faith that spanned more than a quarter of a century. Hope After Faith is his account of that journey.

DeWitt was a pastor in the town of DeRidder, Louisiana, and was a fixture of the community. In private, however, he'd begun to question his faith. Late one night in May 2011, a member of his flock called seeking prayer for her brother who had been in a serious accident. As DeWitt searched for the right words to console her, speech failed him, and he found that the faith which once had formed the cornerstone of his life had finally crumbled to dust. When it became public knowledge that DeWitt was now an atheist, he found himself shunned by much of DeRidder's highly religious community, losing nearly everything he'd known.

DeWitt's struggle for identity and meaning mirrors the one currently facing millions of people around the world. With both agnosticism and atheism entering the mainstream—one in five Americans now claim no religious affiliation, according to a recent study—the moment has arrived for a new atheist voice, one that is respectful of faith and religious traditions yet warmly embraces a life free of religion, finding not skepticism and cold doubt but rather profound meaning and hope. Hope After Faith is the story of one man's evolution toward a committed and considered atheism, one driven by humanism, a profound moral dimension, and a happiness and self-confidence obtained through living free of fear.

Praise For Hope after Faith: An Ex-Pastor's Journey from Belief to Atheism…

Richard Dawkins, author of The God Delusion
“The clergyman who sees the light, loses his faith, and realizes that his life's work has been empty delusion faces worse than inner torment. In small-town America he confronts public ostracism, family break-up, and financial ruin. Such was the predicament of Jerry DeWitt. Brother DeWitt has landed on his feet, but many others still wrestle in the closet with the pain. This poignant book will give them strength.”

Dan Barker, author of Godless: How an Evangelical Preacher Became One of America's Leading Atheists
“Jerry DeWitt tells a truly remarkable story of an actual faith healing. He healed himself of his faith. Jerry's honest and wrenching struggle to find his way out of the Pentecostal/evangelical house of mirrors is driven inexorably by his true concern: his unfailing love for people. I literally got goosebumps reading this page-turner, and cheered for joy at the end.”

Bishop Carlton Pearson, author of God Is Not a Christian, Nor a Jew, Muslim, Hindu... and The Gospel of Inclusion
“My friend Jerry Dewitt is one of those ‘raving lunatics' (spiritual eccentrics) who insists on disturbing the illusion and has thus created a new path for his own soul and continues to evolve. I can hardly wait to see where his bridge takes him and us.”

Jerry DeWitt's ministry began when he was seventeen. After twenty-five years of preaching, including pastorship of two fundamentalist congregations, he became an atheist. DeWitt lives in rural Louisiana.

Ethan Brown is the author of Queens Reigns Supreme, Snitch, and Shake the Devil Off. He lives in New Orleans.
Loading...
or support indie stores by buying on