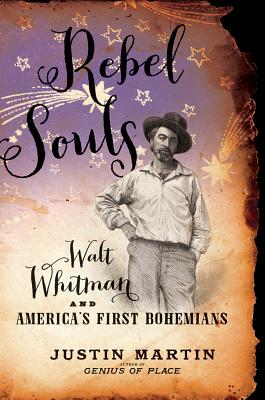 In the shadow of the Civil War, a circle of radicals in a rowdy saloon changed American society and helped set Walt Whitman on the path to poetic immortality.

Rebel Souls is the first book ever written about the colorful group of artists- regulars at Pfaff's Saloon in Manhattan-rightly considered America's original Bohemians. Besides a young Whitman, the circle included actor Edwin Booth; trailblazing stand-up comic Artemus Ward; psychedelic drug pioneer and author Fitz Hugh Ludlow; and brazen performer Adah Menken, famous for her Naked Lady routine. Central to their times, the artists managed to forge connections with Ralph Waldo Emerson, Mark Twain, and even Abraham Lincoln. This vibrant tale, packed with original research, offers the pleasures of a great group biography like The Banquet Years or The Metaphysical Club. Justin Martin shows how this first bohemian culture-imported from Paris to a dingy Broadway saloon-seeded and nurtured an American tradition of rebel art that thrives to this day.

"Whitman
now is a central figure in the American canon, but his Pfaff's pals are all but
forgotten. In Rebel Souls, biographer Justin Martin brings them wonderfully to
life in his enjoyable romp through the milieu. Whitman is the emotional core of
the book - Martin's passages on Whitman's romantic travails and his experiences
tending to wounded soldiers during the Civil War are unforgettably moving. But
the other members of the Pfaff's coterie almost steal the show."—BostonGlobe

"The
book is a veritable who's who of the 19th-century's movers and shakers."—CapeCod Times

"Martin's
historical scope and elegiac prose, laced through with parlance of the period,
is not only grandly entertaining to read, it rescues this bit of cultural
history and gives Whitman a more human dimension past the iconic image."—NewYork Journal of Books

"Anyone who loves history, and particularly literary history, will want to read this book."
—HudsonValley News

"In
this captivating study, Martin transports the reader to the 1850s inside smoky
Pfaff's saloon-the meeting place of the US's first Bohemians...Thanks to
meticulous research, Martin was able to re-create the Bohemian scene, and
Whitman's place in it, in vivid detail. This book is a lively and entertaining
read for students of American literature, history, and culture...Summing Up:
Essential. All readers."—Choice

"[A]
well-written account of the New York Bohemians who gravitated around Pfaff's
Saloon on Broadway...A lively tale, informative and well-told."—MarkTwain Forum

"Does
a great service in shining light on the younger man who still had a lot of
hard-dues-paying years before he sauntered into legend and the ages...A valuable-and
very readable-addition to the body of critical work about America's greatest
poet."—InternetReview of Books

"Places are ever-changing, Manhattan real estate most especially. But, as Rebel Souls proves, biography can play a provocative role in preserving their mystique and also their impact."—NewBooks in Biography

"[A]
compelling, insightful group biography...Vividly describes not only Pfaff's
heyday, but also how Clapp's coterie, once it was dispersed by the chaos,
duties, and opportunities brought by the Civil War, came to define an
unmistakably American species of rebel artist...Martin sets himself an ambitious
task, and rises to it in the structure and reach of his telling. In 1860, the
war scatters his protagonists, whose fates he follows for the latter two-thirds
of Rebel Souls like a literary LoJack...Martin's done a remarkable job bringing
'those times, that place' very much alive through his painstaking
research...Pfaff's rebel souls, Martin makes plain, are all around us."—LosAngeles Review of Books

"A
highly informative look at the very first attempt here in America where
novelists, poets, actors, dancers, visual artists and journalists, came
together and tried to create a society...Martin does an excellent job in Rebel
Souls, in drawing insightful portraits of some of the main characters like
Whitman, which is the heart of his book."—NeworldReview

"What
a cable TV series this would make."—BuffaloNews

"Engaging...The
idea of the artist as outsider or rebel (at least the American version of
it)-and, indeed, the thing that, a century later, would be called a
counterculture-can be traced to Clapp and Pfaff's. Martin's book is a lively
and intelligent entree into that heretofore mostly forgotten world."—ClevelandPlain Dealer

"A
vibrant and well-researched tale that shows how this first bohemian culture
seeded and nurtured an American tradition of rebel art that continues to this
day."—Queerty.com

"Martin
has blown the dust off of the New York City of the pre-Civil War era. He's
magically made both the period and the people who inhabited it relevant,
stirring and captivating with his true account of a New York City bar and its
clientele."—DecaturTribune

"[An]
entertaining cultural history...The author's solid research into the connections
of these curiously varied men and women makes this a wonderful story of one of
the world's odd little cultural cliques."—KirkusReviews, BEA & ALA BookGuide

"An
engaging history of a literary underground...Though Walt Whitman is the
best-known of the group, readers may find themselves drawn to his lesser-known
comrades...Martin's writing rises to the occasion...A worthwhile read...Introduces
armchair literary historians to a dazzling cast of eccentrics."—PublishersWeekly

"This
is popular history the way it should be, well-researched and authoritative yet
demotic in idiom and unpretentious in presentation, a darn good read."—Booklist, starred review

"Martin
brings the legendary group to life, painting a vibrant portrait of the radical
artists who frequented Pfaff's saloon...Rebel Souls is a curious beast of a book:
it is in part American history circa 1850's, part biography and, to a lesser
degree, part a critical examination of Whitman's poems...Historically accurate
and painstakingly researched...It is easy to get lost in this book: the
descriptions mixed with remarkably well retained dialogue are occasionally so
powerful that they transport the reader to their own seat in Henry Clapp's
circle...An invigorating read."—TheJournal

"Long before New York artists and writers convened regularly at the Algonquin and, later, Elaine's, an eclectic group distinguished largely by crushing poverty and creative potential gravitated to a subterranean saloon-decidedly not a salon-named Pfaff's. In Rebel Souls, Justin Martin invites readers to belly up to this forgotten basement bar...Almost every page provides an intoxicating high without the hangover."—NewYork Times

"The
story of how a subterranean New York City saloon helped alter the course of
Whitman's life."—Vox.com

"[Martin]
is a fine historian and great writer...This is a wonderful book about bohemian
culture, a fascinating history that reverberates yet today. Thanks to Mr.
Martin for his painstaking research and the obvious care of his subject that
come out so nicely in his writing."—HeartsAndMindsBooks.com

"A
convincing case that Walt Whitman's drinking buddies were an 1800s version of
the Beats and that all their bending elbows actually improved their work."—KansasCity Star

"[A]
biography of the man and his eclectic counter-culture, a model for artistic,
intellectual non-conformity well into the twentieth century."—CurledUp with a Good Book

"Whitman
is that iconic American poet but [Martin has] really humanized him in [his]
book."—SullivanStreet Press

"Elaine's,
the Algonquin Hotel, the White Horse and Cedar taverns: These and a few other
Manhattan establishments have become legendary as places for writers and
artists...On the evidence of Justin Martin's Rebel Souls, the long-defunct
watering hole Pfaff's deserves similar fame...[Martin] is a fluent, companionable
writer, and he manages to weave his many biographical strands into an engaging
narrative-no mean feat...The experience of reading Rebel Souls is a bit like
hovering on the sidewalk near the entrance to Pfaff's, listening to the sounds
of jollity and vehemence wash up from the basement below. Mr. Martin does a
fine job of making us feel that we're back on antebellum Broadway."—WallStreet Journal

"Martin's
sharp and elegiac prose follows the lives of the Bohemians, many who meet
tragic ends. Their stories are grandly entertaining to read, and Martin rescues
a large chunk of our cultural history."—EDGE

"It's
rare for a book to conjure the feeling of being in a bar with one's rowdiest
and most interesting friends. Rebel Souls...does just that."—TheARTery

"Brightly written, and funny and heartbreaking by turns...Thomas Aldrich, a poet that was in the circle, included in his poem 'At the Cafe' the line, 'We were all very merry at Pfaff's.' Let us be grateful that Rebel Souls has brought a touch of the merriment back."—ColumbusDispatch

"Meticulously
researched and absolutely fascinating. This book featuring this quirky cast of
characters with Whitman at the center really brings the bohemian group of
American romantic artists to life."—BetsyReads Books

"Rebel
Souls is at once a recreation of New York during the mid-19th century and a
group biography of people who changed the way Americans viewed art, politics
and themselves...A muralesque portrait of a group of intentional misfits who
would, in the middle of the 19th century, help transform American literature,
theater and journalism and forever alter the way we look at ourselves and our
society."—RoanokeTimes

"Shed[s]
light on the untold story of the Pfaff's set and its ample reverberations through
the last 150 years of creative culture...Rebel Souls is an enormously absorbing
read in its entirety, exploring the blossoming of Whitman's literary legacy,
the tantalizing group of artists, writers, and performers who populated Pfaff's
and influenced one another, and how they made their way West to meet Mark
Twain's Bohemians of Silicon Valley."—BrainPickings

"Rife
with...scintillating anecdotes...This period in Whitman's development is often
skated over in biographies of the Good Gray Poet, and Martin has done us a
favor by bringing it, along with a host of other artistic connections,
amusingly and indelibly back to life."—WashingtonPost

Justin Martin is the author of several books, with his two most recent titles covering Civil War-era subjects. Rebel Souls: Walt Whitman and America's First Bohemians, selected as the outstanding biography of 2014 by the Victoria Society, New York, and as a finalist for the Marfield Prize, was also picked as one of the best books of that year by both the Kansas City Star and Choice magazine. Genius of Place: The Life of Frederick Law Olmsted was also met with many plaudits and glowing reviews nationally. Martin lives with his wife and twin sons in Forest Hills Gardens, New York.
Loading...
or
Not Currently Available for Direct Purchase