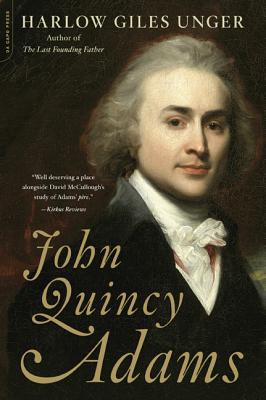 He fought for Washington, served with Lincoln, witnessed Bunker Hill, and sounded the clarion against slavery on the eve of the Civil War. He negotiated an end to the War of 1812, engineered the annexation of Florida, and won the Supreme Court decision that freed the African captives of The Amistad. He served his nation as minister to six countries, secretary of state, senator, congressman, and president.

John Quincy Adams was all of these things and more. In this masterful biography, award winning author Harlow Giles Unger reveals Quincy Adams as a towering figure in the nation's formative years and one of the most courageous figures in American history, which is why he ranked first in John F. Kennedy's Pulitzer Prize-winning Profiles in Courage.

A magisterial biography and a sweeping panorama of American history from the Washington to Lincoln eras, Unger's John Quincy Adams follows one of America's most important yet least-known figures.

Acclaimed historian Harlow Giles Unger is a former Distinguished Visiting Fellow at George Washington's Mount Vernon. He is the author of twenty-six previous books, including twelve biographies of America's Founding Fathers and three histories of the early Republic. He lives in New York City.
or
Not Currently Available for Direct Purchase