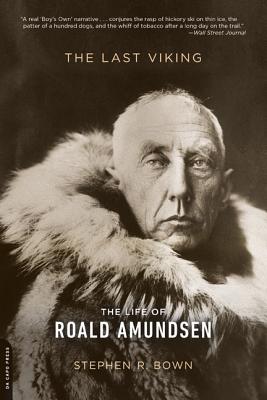 The Life of Roald Amundsen (A Merloyd Lawrence Book)

The Last Viking unravels the life of the man who stands head and shoulders above all those who raced to map the last corners of the world. In 1900, the four great geographical mysteries--the Northwest Passage, the Northeast Passage, the South Pole, and the North Pole--remained blank spots on the globe. Within twenty years Roald Amundsen would claim all four prizes. Renowned for his determination and technical skills, both feared and beloved by his men, Amundsen is a legend of the heroic age of exploration, which shortly thereafter would be tamed by technology, commerce, and publicity. FÃ©d in his lifetime as an international celebrity, pursued by women and creditors, he died in the Arctic on a rescue mission for an inept rival explorer.

Stephen R. Bown has unearthed archival material to give Amundsen's life the grim immediacy of Apsley Cherry-Garrard's The Worst Journey in the World, the exciting detail of The Endurance, and the suspense of a Jon Krakauer tale. The Last Viking is both a thrilling literary biography and a cracking good story.

Praise For The Last Viking: The Life of Roald Amundsen (A Merloyd Lawrence Book)…

“A compelling and enjoyable introduction to the man and his adventures. Bown writes Amundsen's story with a sharp eye to what's important…Amundsen's life is without a doubt fascinating, and Bown does it a service by getting out of the way and just telling the story. At about 300 pages, this is a pleasurable, entertaining read that never overstays its welcome.”

Internet Review of Books, 12/19/12“Amundsen's exciting life makes this an amazing read and the sixteen pages of photos are captivating.”
Santa Fe New Mexican, 1/18/13“[A] comprehensive biography…An eye-opening mind-blowing page-turner. Bown has the ability to convey reams of facts, figures, and statistics while engaging the reader in Amundsen's many life-and-death adventures.”

Canada's History“Those who love tales of Arctic exploration and discovery will not be disappointed by Stephen R. Bown's fresh look at the man many consider to be the world's greatest polar explorer. From beginning to end, the Canadian writer's telling of Roald Amundsen's life is a thrilling yet thoughtful narrative.”

“Author Stephen Bown hopes to repair Amundsen's reputation and re-introduce his achievements to readers at a time when exploration on a grand geographic scale seems like ancient history. He succeeds; his Amundsen is complicated and compelling, capable of leading men through deadly danger and telling self-deprecating stories to rapturous lecture audiences later…The New York Times published hundreds of articles chronicling his voyages, and Bown gracefully weaves together these and other journalistic records, along with journals kept by Amundsen and his men, to paint a surprisingly intimate portrait of a complex, at times difficult, yet eminently admirable man.”
Denver Post, 9/30/12“A deep, spine-chilling look at the life of Roald Amundsen, Norwegian polar explorer.”
Tucson Citizen, 10/4/12“An outstanding biography of a focused, determined man…Bown has served up a crisply written book that is exciting, meticulously researched, and an appropriate literary tribute to one of history's greatest explorers.”
Bookviews blog, October 2012“The story of a man who accomplished in two decades when other explorers of his day couldn't do in a lifetime…The world needs heroes like Amundsen, warts and all.”

WomanAroundTown.com,9/27/12“Details both the good and the bad about his extraordinary man.”

“Brown's biography…breaks some new ground in detailing the explorer's time spent in New York and the evidence of his sense of humor, which stands in contrast to the usual picture of him as cold, methodical and harsh.”
Winnipeg Free Press, 10/6/12“Bown's tension-packed narrative recounts the illustrious career of the most accomplished polar explorer of all time.”

Shipwreckology.com, 10/25/12“In a world where little is left to explore, Bown transports his readers to a time when great men battled nature to explore the earth's last remaining terra incognita. As the winter months approach, readers would be well served to buy The Last Viking and curl up in front of a roaring fire to enjoy Bown's gripping account of Amundsen's epic polar adventures.”
Maclean's, 10/26/12“Bown draws on extensive research and access to the personal journals of Amundsen and his travel companions to paint rich and gripping accounts of his perilous voyages. These are often marvelously entertaining.”
Calgary Herald, 10/19/12“Sheds new light on the life and legend of Roald Amundsen.”

“Mr. Bown has produced a solid, entertaining account of Amundsen's adventures, through which he scrolls with pleasing attention to detail. This is a real ‘Boy's Own' narrative, one that conjures the rasp of hickory ski on thin ice, the patter of a hundred dogs, and the whiff of tobacco after a long day on the trail. Mr. Bown is especially good on historical context.”
Toronto Sunday Star, 11/4/12“Bown's research is impeccable and his writing lucid.”

San Antonio Express-News, 11/11/12“A fascinating look into the life of the Norwegian explorer…Bown deftly captures the true essence of the man instead of merely paying homage to the legend…The Last Viking gives readers an in-depth look into what it was like to travel into some of the last unknown regions of the world without today's fancy gadgets or even the basics such as maps, local guides or reliable communication. Amundsen, perhaps the greatest polar explorer of all time, comes to life once again to ignite the spirit of exploration in all of us.”
Toronto Globe & Mail, 11/16/12“Bown writes from the lofty, distancing heights of the fair-minded historian…The work is sharp-eyed, thorough and convincing, and constitutes a significant addition to the Arctic canon.”

“One of Bown's strengths in writing this biography is his ability to write about Amundsen's expeditions—often multi-year affairs during which the crew was completely isolated—in a way that engages readers accustomed to satellite phones and real-time updates…Bown's clear prose never gets bogged down by the vast emptiness of its settings or by Amundsen's regular successes in his expeditions. And when things do go wrong, such as when Amundsen attempts to fly a plane over the North Pole, Bown writes a tense narrative in which men struggle against themselves and nature to survive...The Last Viking should restore this remarkable man's place in the canon of explorers, while winning itself a prized place on the shelves of adventure enthusiasts.”

“These later stories of Amundsen's life are less frequently told, and Bown has done a good job of restoring them to Amundsen's biography…Since the highly private Amundsen kept his private life to himself, we get little insight into the man (and Bown wisely avoids speculation). What we do get is an overdue acknowledgment of what Amundsen was: the greatest polar adventurer who ever lived, and the man whose life was the capstone on the Age of Exploration.”

“[A] full-bodied tale…The book provides detailed insights into the preparations and human elements involved in surveying arctic regions. Using actual diary entries from the Arctic expeditions to chilling effect, Bown makes the reader feel as though they have embarked on a journey through the world's harshest climates and inhospitable lands…[Amundsen] lived a life suited for the pages of an adventure novel. Bown's new biography reads as such.”
Portland Book Review, December-February 2012“Bown is a terrific writer, never sensational, always seeming to share the achievements of a friend. His discretion about Amundsen's personal life leaves us with an endearing, enigmatic hero.”
“Bookworm Sez” syndicated column, 12/4/12“Armchair adventurers will love reading The Last Viking.”
“The Homestretch” on CBC Radio, 11/26/12“Reveals the private side of a man whose exploits made him a household name in the early 20th century.”

“[Bown] did his homework. The bibliography is basically every book out there, plus he did a lot of his own work in extensive newspaper story research (NYT–predominantly). There is a lot of controversy about this man and his methods–a lot of bias that Bown seems to navigate around. If you haven't read about polar exploration it's a good book to read since it relates the entire history of man's search for the final fabled lost lands or undiscovered sea lanes that would make trade travel quicker and cheaper…In this day of constant communication the book acts like an escape of sorts to a time when years would go by between shoving off on an expedition and returning.”
“Politics and Patriotism Show” (blog), 11/21/12“An eye opening history of the larger-than-life Norwegian explorer…Intensely researched and passionately written.”
Literary Review of Canada, October 2012“A riveting tale of adventure, political intrigue and achievement…Exceptionally well researched and eminently readable…An important contribution to the historiography of polar exploration.”

Sacramento Book Review/San Francisco Book Review, 12/7/12
“Stephen Brown makes Amundsen feel real, not just a part of history. Brown's stories are well-researched and it shows in the book. It is really detailed and covers many different aspects of Amundsen's life…The pace of the book was excellent and every part is filled with suspense…This is a great book for anyone, especially if you want to relive the moments of an unexplored Earth.”

Reference and Research Book News, December 2012
“[Bown] describes Amundsen's approach to expeditions as military operations and portrays his gift for flamboyant self-promotion and publicity seeking on the lecture circuit.”

CBC Books, 12/17/12“Bown draws on extensive research to create a clear and often surprising portrait of a truly adventurous spirit.”Library Journal, 12/20/12“A great new biography… Well written and enjoyable, the book uses ample quotes from Amundsen to give readers a sense of the man… a great title for collections that don't own Amundsen's own books or previous biographies, this volume is recommended for readers high school-age and up who are interested in polar exploration.”
Minneapolis Star-Tribune, 1/8/13“[A] persuasive and highly readable biography/adventure story.”

Curled Up with a Good Book

Long-listed for the BC National Award for Canadian Non-Fiction

One of theToronto Globe & Mail's Globe 100: The Globe's Top Non-Fiction Books of the Year
Named to Kirkus Reviews's “Best Books of 2012” list

Kirkus Reviews (starred), 8/15/12“An intensely researched, thoroughly enjoyable life of one history's best explorers…A superb biography of a fiercely driven explorer who traveled across the last inaccessible areas on earth before technical advances made the journey much easier.”

Publishers Weekly, 8/27/12“[A] captivating account of the Norwegian's extraordinary life…Bown makes a compelling case that Amundsen deserves renewed recognition for his outstanding achievements.”

London Sunday Times 9/16/12“[A] fascinating biography…As a depiction of an explorer's life it is intelligent and often thrilling.”

Stephen R. Bown is author of The Last Viking: The Life of Roald Amundsen and White Eskimo: Knud Rasmussen's Fearless Journey into the Heart of the Arctic, which won the Williams Mills Award for the best book on the Arctic in 2016. His award-winning books, including Scurvy and Madness, Betrayal, and the Lash, have led to a reputation as "Canada's Simon Winchester."
Loading...
or support indie stores by buying on