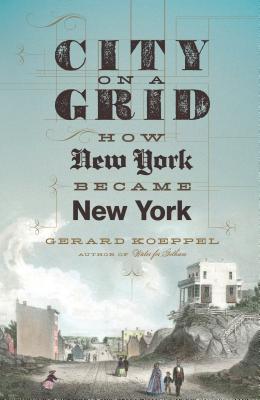 City on a Grid

You either love it or hate it, but nothing says New York like the street grid of Manhattan. Created in 1811 by a three-man commission featuring headstrong Founding Father Gouverneur Morris, the plan called for a dozen parallel avenues crossing at right angles with many dozens of parallel streets in an unbroken grid. Hills and valleys, streams and ponds, forests and swamps were invisible to the grid; so too were country villages, roads, farms, and estates and generations of property lines. All would disappear as the crosshatch fabric of the grid overspread the island: a heavy greatcoat on the land, the dense undergarment of the future city.

No other grid in Western civilization was so large and uniform as the one ordained in 1811. Not without reason. When the grid plan was announced, New York was just under two hundred years old, an overgrown town at the southern tip of Manhattan, a notorious jumble of streets laid at the whim of landowners. To bring order beyond the chaos-and good real estate to market-the street planning commission came up with a monolithic grid for the rest of the island. Mannahatta-the native "island of hills"-became a place of rectangles, in thousands of blocks on the flattened landscape, and many more thousands of right-angled buildings rising in vertical mimicry.

The Manhattan grid has been called "a disaster" of urban planning and "the most courageous act of prediction in Western civilization." However one feels about it, the most famous urban design of a living city defines its daily life. This is its story.

Praise For City on a Grid: How New York Became New York…

Kirkus Reviews, 8/15/15
"For Manhattanites, surely, and for anyone who's visited and been either charmed or overwhelmed by the grid.”

Library Journal, 9/18/15
“Readers curious about the growth of infrastructure in large city centers will definitely be interested in Koeppel's take.”

Manhattan User's Guide, 11/11/15
“Makes the clear-cut case that—whether you like the grid or not—it has more daily impact on millions of people than almost any other urban plan you can name.”

New York Journal of Books, 12/1/15
“A fascinating and curious story that takes us back through time to the early beginnings of the city…It is also a drama that delves into the lives and travails of the original surveyors…who mapped the island and saw it not for the city that it was, but the metropolis that it would become…A well-researched ambitious tale of intrigue intertwined with political significance…Koeppel tantalizes with little known facts…A fun, fascinating, and accessible read for those curious enough to delve into the origins of an amazing city.”

David Duchovny, actor, author, native New Yorker
"I've spent most of my life walking the straight lines of the world's greatest city and have never thought to ask: Is this a different shape from other cities, and if so, why, and who did it? Koeppel's book answers these questions, in an easygoing, good-humored manner, with interesting facts unearthed on nearly every page. This is one of those books you always wished would be written, and here it is. Indispensable for anyone interested in the history of New York and cities generally, and bound to fuel cocktail conversations up, down, and across the city for years to come."

Justin Martin, author of books about a pair of New York eminences, Walt Whitman and Frederick Law Olmsted
"If Manhattan has a subconscious, it's the angular numbered street plan that, for two centuries, has informed the island's destiny. Koeppel does a masterful job of telling the little-known story behind this humble yet hallowed grid. Along the way, he introduces a vivid cast of characters and spins some lively anecdotes. A thoroughly enjoyable read, and one that will cause you to view Manhattan with fresh eyes."

Washington Book Review, 1/5/16
“Koeppel explains the history of New York like nobody has done before…A fascinating and unique read…A must read for every New Yorker and anyone who loves New York.”


New York Times Book Review, 1/10/16
“The best account to date of the process by which an odd amalgamation of democracy and capitalism got written into New York's physical DNA.”

Publishers Weekly, 9/14/15
“A look at the story behind the development of New York City's extraordinary 1811 street grid plan, which 'defined the urbanism of a rising city and nation.'…[An] expert investigation into what made the city special…Koeppel's bold commentary on the constant evolution of Gotham may stir controversy in some quarters, but he unabashedly celebrates the metropolis that has never learned what it means to grow old or stale.”

The New Yorker, 10/5/15
"Tells the too little-known tale of how and why Manhattan came to be the waffle-board city we know."

Kate Ascher, author of The Works: Anatomy of a City
"Rarely does one come across a book that makes you rethink the city you thought you knew.... Koeppel's masterful story-telling does that and more."

"An accessible narrative on the development of New York's grid plan, tailored primarily for a popular, rather than strictly academic, audience...but it will also be of interest to scholars working in the fields of urban historical geography, urban planning history, and the history of cartography."
—Historical Geography

"A fascinating look at urban planning...A masterful piece that explains the creation and evolution of New York City's grid."—Collected Miscellany

"Koeppel's book is engaging, entertaining, highly informative, and will be useful to both long-time residents and first-time visitors. It is also copiously and precisely documented, greatly aiding further research into the innumerable details of the city."—Reviews in American History

Gerard Koeppel is the author of Water for Gotham, Bond of Union, and City on a Grid. He has contributed to numerous other books, including the Encyclopedia of New York City, of which he was an associate editor. He was an editor for many years at CBS News. He lives in New York City.
Loading...
or
Not Currently Available for Direct Purchase