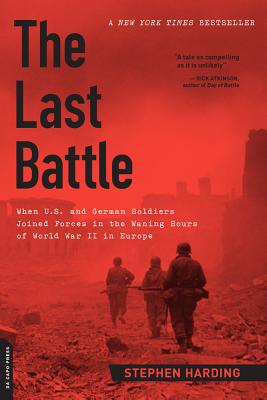 When U.S. and German Soldiers Joined Forces in the Waning Hours of World War II in Europe

The incredible story of the unlikeliest battle of World War II, when a small group of American soldiers joined forces with German soldiers to fight off fanatical SS troops
May, 1945. Hitler is dead, the Third Reich is little more than smoking rubble, and no GI wants to be the last man killed in action against the Nazis.

The Last Battle tells the nearly unbelievable story of the unlikeliest battle of the war, when a small group of American tankers, led by Captain Lee, joined forces with German soldiers to fight off fanatical SS troops seeking to capture Castle Itter and execute the stronghold's VIP prisoners. It is a tale of unlikely allies, startling bravery, jittery suspense, and desperate combat between implacable enemies.

Praise For The Last Battle: When U.S. and German Soldiers Joined Forces in the Waning Hours of World War II in Europe…

"At the heart of The Last Battle is a largely unknown story that (a) seems implausible, (b) would make a great movie, and (c) reminds us that almost 70 years after the end of World War II there are countless tales still to be told...Harding's skills as a researcher and dedicated historian are apparent...Harding has brought the implausible story to life."
—San Diego Union-Tribune

"[Harding] turns a footnote into a major drama with the story of how American tankers and German prison guards fought a Nazi unit to save French VIPs from execution."
—Military Hisotry Quarterly

"If, in these halcyon days, a Hollywood screenwriter had approached a major producer with a movie script so packed with improbabilities, so extraordinary in its premises and fanciful in its conclusions, he--the screenwriter--would very likely have been shown the door...A fine tale of heroism and cowardice, petty bickering and unselfish sacrifice, and if Hollywood does not snap it up for an epic film, that's its loss...A page-turner."
—Roanoke Times

"The Last Battle has the makings of a Hollywood blockbuster...Harding is a gifted storyteller and effective military historian who details the battle and its background with precision...This compact work is an unqualified success and will prove immensely enjoyable for virtually any reader of ARMY. With the pace of a tightly-written novel, Harding writes with the determination of a true crime novelist and thoroughness of a first-rate historian."
—ARMY

"One of the most bizarre and fascinating tales to come out of World War II."
—Examiner.com

"Provides a fascinating glimpse into a situation so bizarre and deadly that Hollywood could not have dreamed it up, though they will probably be happy to buy the movie rights..Truth is stranger than fiction."
—On Point

"Harding does an excellent job in his research and pieces together the few available fragments to tell a story of trust, uncertainty, and moral righteousness."
—Military Review

"Harding recounts a fascinating piece of World War II history...An engaging story about a battle that helped save many of France's political elite from certain death."
—Collected Miscellany

"A book with a narrative Hollywood could only hope for."
—America in WWII

"[A] suspenseful tale of the one-day engagement fought by once important, brave, and spiteful Frenchmen, plucky and ingenious American GIs, and German soldiers acting very much out of character."
—Michigan War Studies Review

"The most extraordinary things about Stephen Harding's The Last Battle, a truly incredible tale of World War II, are that it hasn't been told before in English, and that it hasn't already been made into a blockbuster Hollywood movie...Harding is a respected military affairs expert...and his writing style carries immediacy as well as authority...Everything that Harding reports in this exciting but also historically accurate narrative is backed up with meticulous scholarship. This book proves that history can be new and nail-bitingly exciting all at once."
—Andrew Roberts for The Daily Beast
or
Not Currently Available for Direct Purchase
Copyright © 2020 American Booksellers Association