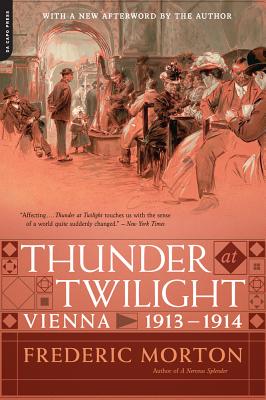 It was during the carnival of 1913 that a young Stalin arrived in Vienna on a mission that would launch him into the upper echelon of Russian revolutionaries, and it was here that he first collided with Trotsky. It was in Vienna that the failed artist Adolf Hitler kept daubing watercolors and spouting tirades at fellow drifters in a flophouse. Here Archduke Franz Ferdinand had a troubled audience with Emperor Franz Joseph-and soon the bullet that killed the Archduke would set off the Great War that would kill ten million more.

With luminous prose that has twice made him a finalist for the National Book Award, Frederic Morton evokes the opulent, elegant, incomparable sunset metropolis-Vienna on the brink of cataclysm.

Costa Mesa Daily Pilot, 4/18/14
“The detail surrounding the many people involved in the slice of history building up to World War I is amazing…This book, with its accounts of the activities of many countries' politicians and the culture of Vienna at the time, explains what was going on so well that you almost feel as though you are there.”

Huffington Post, 5/31/14
“A book about war and madness…A fascinating and well-written account of the social origins and context of [World War I].”
—-

"While we're still marching through the centennial of the First World War, this is the perfect time to delve into the history, not just of the war itself but of the world that produced it. Frederic Morton's vivid portrait of antebellum Vienna begins with the intrigues and tensions roiling the Hapsburg capital in 1913 and ends with the breakdown of diplomacy among the Great Powers and the outbreak of war in the fall of 1914. Along the way, he introduces the reader to major historical figures of the twentieth century."
—The Federalist, "Notable Books of 2016"

Frederic Morton was born in Vienna and lives in New York City. His short stories have been chosen for Best American Short Stories, and two of his critically acclaimed nonfiction works, The Rothschilds and A Nervous Splendor, have been bestsellers.
Loading...
or support indie stores by buying on